Husband and wife Brett and Lisa Davis were among the racers looking to take advantage of fast conditions in an a3crg 10-mile time-trial on the evening of Wednesday 14th July.  Racing for Drag2Zero Lisa sped up and down A3 course near Haslemere in 23 minutes dead to finish 5th of the 17th female entrants while Brett (trainSharp) was just 4 seconds outside of 20 minutes, but had to settle for 8th of the 58 male athletes.

The action switched from the road to the track, and more specifically Goodwood Historic race track the next day as Fat Creations hosted an evening of bunch races around the circuit.  Anya Tamplin (Hunt Bike Wheels) took bronze from a field of 22 females in her race.  In the event for 3rd Category male racers Dan Street was a strong 23rd from 53, while in the Cat 4 race Richard Burchett achieved a fine 8th place while Paul Fletcher (trainSharp) was 25th from 28.

Back in Sussex the same night Peter Baker took runner-up spot in an Eastbourne Rovers 14.07-mile TT event thanks to his time of 39 minutes and 2 seconds.  It possibly took something out of him though as he was 22nd from 23 in the following night’s Round 6 of the Sussex Cycle Racing League Summer Circuits at Preston Park.

Half-a-dozen Wanderers took on the Veteran Time-Trials Association (Surrey/Sussex) along the A22 early the next morning.  Nick Dwyer took third place on the podium with a swift 21:40, albeit only two places ahead of Gavin Richards (23:02); Paul Fletcher (trainSharp) was 7 seconds and a further 2 places behind.Peter Baker was 16th in 24:33; Kate Thomas 21st and second fastest female in 25:45 and Allan Smith 27th from 32 in a personal best of 26:38; while south of Ashford at the same time Joe Benians was also recording a new PB and claiming 4th of 50 entrants in the VTTA (Kent) 10-miler. 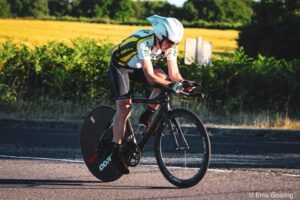 It was Kate’s turn to cross the county border and come away with a new mark the very next day.  She smashed 25 minutes for the first time and stopped the watch after 23 minutes and 50 seconds to claim 5th in a Southborough & District Wheelers 10-mile TT up and down the A21 from Tonbridge.  It was a good day for the family as proud father John Mankelow recorded 25:15, one of his fastest times for many a year.

Over near Tring in the VTTA (London & Home Counties) 10 that same morning Paul Valks time of 26 minutes was only good enough for 133rd from 137 finishers such was the strength of field and clearly fast conditions in the summer heat.