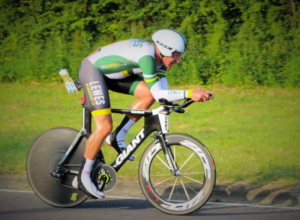 There were no Lewes Wanderers in race action this week until the evening of Thursday 10th August when one took to the track and one to the road. Young Cameron Cragg claimed a fine 9th place in Round 9 of the Gravesend Cyclopark Summer Race Series while Gavin Richards also finished 9th of 21 racers in the Eastbourne Rovers CC 10 mile time-trial down at Pevensey, but his time could have been so much better than the 23 minutes and 27 seconds he recorded had he not punctured in the last quarter-mile.

Cameron was back in action and showing his versatility on Saturday afternoon in the Brighton Big Dog mountain bike races. There were only three entrants in his age category, but the Lewes rider came out on top over 6 laps of just over two-and-a-half miles of Stanmer Park singletrack.

It was a bright and sunny Sunday morning for the East Sussex Cycling Association 100 mile time-trial which incorporated Lewes Wanderers’ championship for the distance. Retaining the title he previously carried off in 2014 was Tom Glandfield who completed the course in just one minute and 21 seconds outside of four hours and also claimed 7th place overall. He had two clubmates for company amongst the field of 37, Peter Baker finishing 18th in a new personal best of 4:21:40 and John Mankelow (30th) just beating five hours with 4:57:57.