Peter Baker was the only Lewes Wanderer down at Preston Park for Week 15 of the Sussex Cycle Racing League Wednesday Track League on 21st July.  He finished 10th in the 6-lap scratch race; 8th in the 9-lap points race; 9th in the 3-lap dash and 8th in his final race of the evening.

The following evening Nick Dwyer was among 24 racers hoping to take advantage of more balmy weather and some freshly laid tarmac on the A24 in a Worthing Excelsior 10.  Nick recorded a blistering time of 20 minutes and 6 seconds in an event that was won in a new course record time of 18:41. 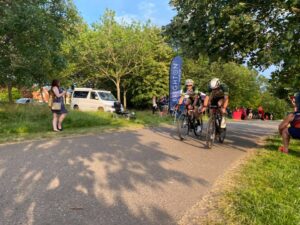 Friday night saw a quartet of Wanderers trying their luck around the swooping curves of Hove Park in Round 3 of the Brighton Mitre run races.  Anya Tamplin (Hunt Bike Wheels) triumphed once more in the race for females.  Joe Benians started really strongly and took both of the intermediate Prime sprints only to clip a pedal on a corner and then cramp up forcing a premature retirement.  Richard Burchett and Dan Street couldn’t quite get to terms with the pace and finished outside the top 10.

It was still mild, but decidedly wet the following morning as Joe returned to action on the Sussex Cyclists’ Association Centenary 10 on a new and unusual L-shaped course between Handcross and Pease Pottage.  Joe was still feeling the after-effects of the night before, but recorded a strong 22:59.  Mike Hannay should have joined him on the result sheet, only to take a wrong turn on his way to the start.

Neither of them took the start for the following morning’s SCA 30, but Peter Baker was back and his time of 1 hour 17 minutes and 45 seconds placed him 16th of the 22 finishers with 9 others opting not to start and 2 failing to finish in what were inclement conditions.

On the A3 north of Petersfield the following morning a pair of Wanderers were among 59 athletes to brave the forecast thunderstorms in a Hampshire CC 25.  Brett Davis (trainSharp) was a fine 8th in 50 minutes and 55 seconds, while Duncan Fuller was 46th in 59:14 while 65 entrants failed to start.