The 10th Round of Lewes Wanderers’ series of 10-mile time-trials took place on the evening of Monday 5th July.  Pete Morris (Team TMC) set the fastest time of the night with 23 minutes and 15 seconds, but he was only 7 seconds ahead of runner-up Paul Fletcher (trainSharp).

Peter Baker was back testing himself against the watch on the first evening of July, but his time of 27 minutes and 43 seconds for the 14.07 mile event run by Eastbourne Rovers CC was only good enough for 14th place.

Back on Sunday 27th June Anya Tamplin (Hunt Bike Wheels) managed 12th place from 21 finishers in a London Dynamo 50-mile road race.  She found the opening round of the Brighton Mitre run Hove Park Crits on Friday 9th July far more to her liking as she came away with victory.  Dan Street and Richard Burchett competed in the men’s race, but found the pace too hot to trouble the top ten. 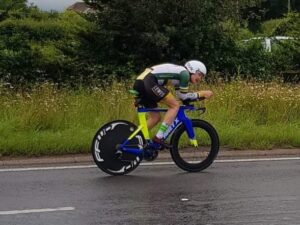 Joe Benians and Mike Hannay took full advantage of the warm dry conditions on the morning of Sunday 11th July to both set personal bests in a Brighton Excelsior run 25-mile TT.  Joe reduced his best by 2 minutes and 15 seconds to 54:04 to finish 5th, while Mike reduced his PB by just 3 fewer seconds to 1:02:10 in claiming 34th from the 43 finishers.

Nick Dwyer switched from the ultra-aero world of time-trial racing to virtually the extreme opposite that morning as he took part in the Eventrex Vittoria MTB Marathon in the grounds of Pippingford Park, between Nutley and Wych Cross.  In a highly attritional race he lasted two of the scheduled 18km laps before calling it a day due to the increasingly slippery conditions when in 33rd position from 41 starters.

Thanks to sterling support from her five Drops Le Col supported by Tempur team-mates  Lewes Wanderer Joscelin Lowden triumphed in the four-day Tour de Feminin in the Czech Republic.  Under her own steam she finished runner-up by 2 seconds in the opening 12.6km individual time-trial on Thursday 8th July.

The race blew apart on the following day’s 101.7km road stage and the previous yellow-jersey lost over 12 minutes while strong work from her team enabled Joss to finish in the leading group to inherit that garment and a lead of 5 seconds.

Time bonuses gained both at the finish and en route by the winner of the 110.7km 3rd stage meant that Joss ceded the race lead by 9 seconds overnight, but she hit back to win the final 114.6km stage by 5 minutes and 2 seconds to take the overall by 6:25 and the Mountains jersey in the process.