An account by Des Terrill, a prime mover in our club's re-formation. He and his wife, Joyce, started cycling with the then Lewes and Newhaven Section of the CTC in 1947 and with hard work and enthusiasm helped to lay a solid foundation for the LWCC as it is today. Des sadly died in November 1995 aged 67 a few months after writing an this account of the clubs early days. 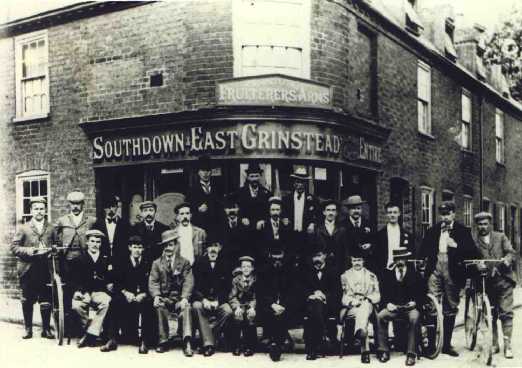 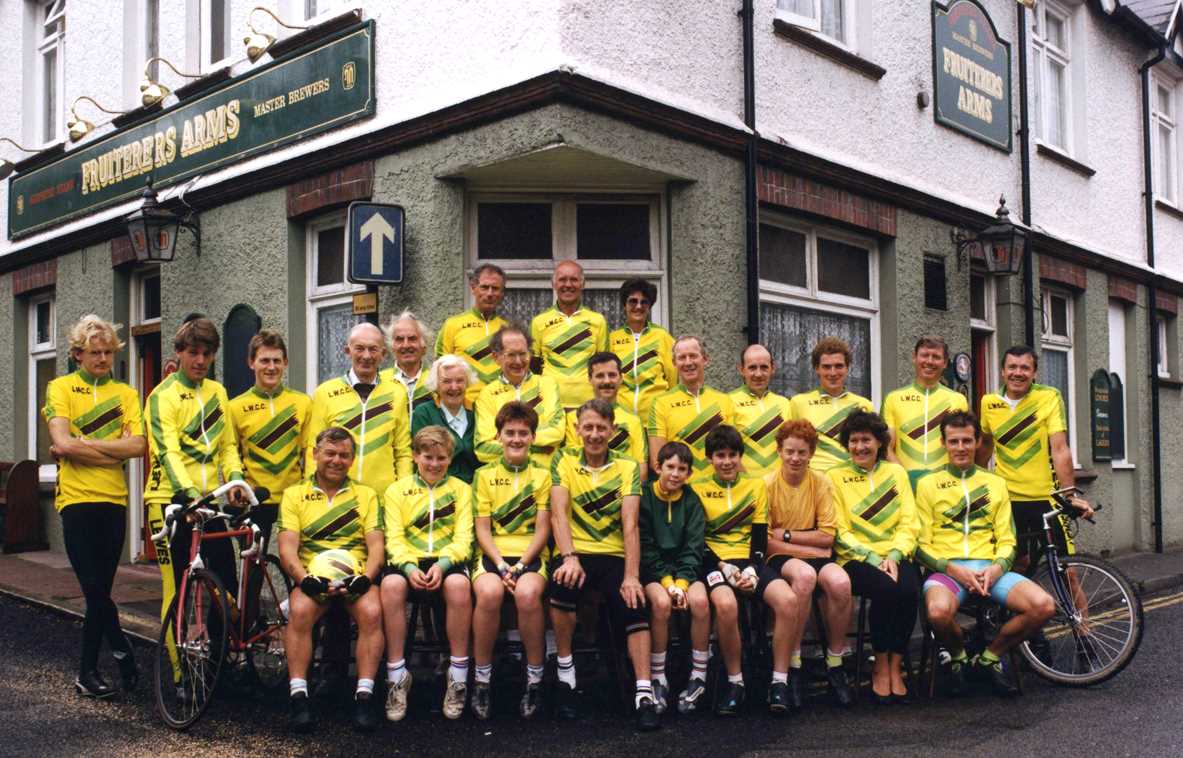 1990, also taken outside the same Fruiterers Arms in Lewes.

There had been a Lewes Wanderers Cycling Club before the Second World War but it closed down in 1938. When the war ended, some of the ex-Servicemen returning to their homes in East Sussex revived the Cyclists' Touring Club in Lewes. As the section grew, many of the younger riders wanted to try racing. To do this, they formed the Lewes-Newhaven Road Club at a meeting in the Brewers Arms in Lewes on April 30th 1950.

We marked out courses over 10, 15, 25 and 30 miles and the first race was on May 21st 1950 - a ten mile time trial. The club colours were selected: brown, yellow and green. Joyce Terrill worked out a pattern and knitted many of the jumpers for the club.

It was suggested that we should try to find any of the remaining assets of the pre-war Lewes Wanderers CC, which closed down in 1938, with a view to starting it up again. This chore was left to Dick Whittington. A Mr. Ted Jenner was contacted regarding old Lewes Wanderers assets and he produced a leather case with headed paper, lapel badges and a stopwatch. A bank statement was traced which had 7s.6d. in it.

In October 1950 Mr. Roy Humphrey (ESCA secretary) was asked to advise us on joining ESCA and SCA, etc. It must have been good advice because on November 14th 1950, at another meeting in the Brewers Arms, it was decided to drop the Lewes Newhaven RC name and the Lewes Wanderers Cycling Club was formed.

Also on the committee at this time was an enthusiastic youth by name of Mick Burgess. Membership cost five shillings a year. There were about 30 members, with 20 or so racing.

A clubroom was opened at the East Side Social Centre in Newhaven - the first hire charges being paid by the club's building workers, who were doing internal alterations. We had darts, table tennis and a set of home-made rollers loaned by Dick Whittington.

Christmas, 1951, saw a big party in our clubroom. Our President and vice-presidents attended. We had a bar, a big raffle, dancing and a roller competition.

The Easter tour took us to the Cotswolds. On the Whitsun Bank Holiday we took part in a fete at the Dripping Pan in Lewes, when we gave a display of roller racing and at times drew crowds of up to 200. The club also took part in a procession through Lewes, all riding bikes like a penny-farthing, Dursley-Pedersens, and an old tandem with the lady riding on the front and the man steering from the back.

Four of our members got married and Dick Whittington was moving away, so Mick Burgess took over as secretary until he was called up into the army.  The year ended with a dinner and a very happy club. 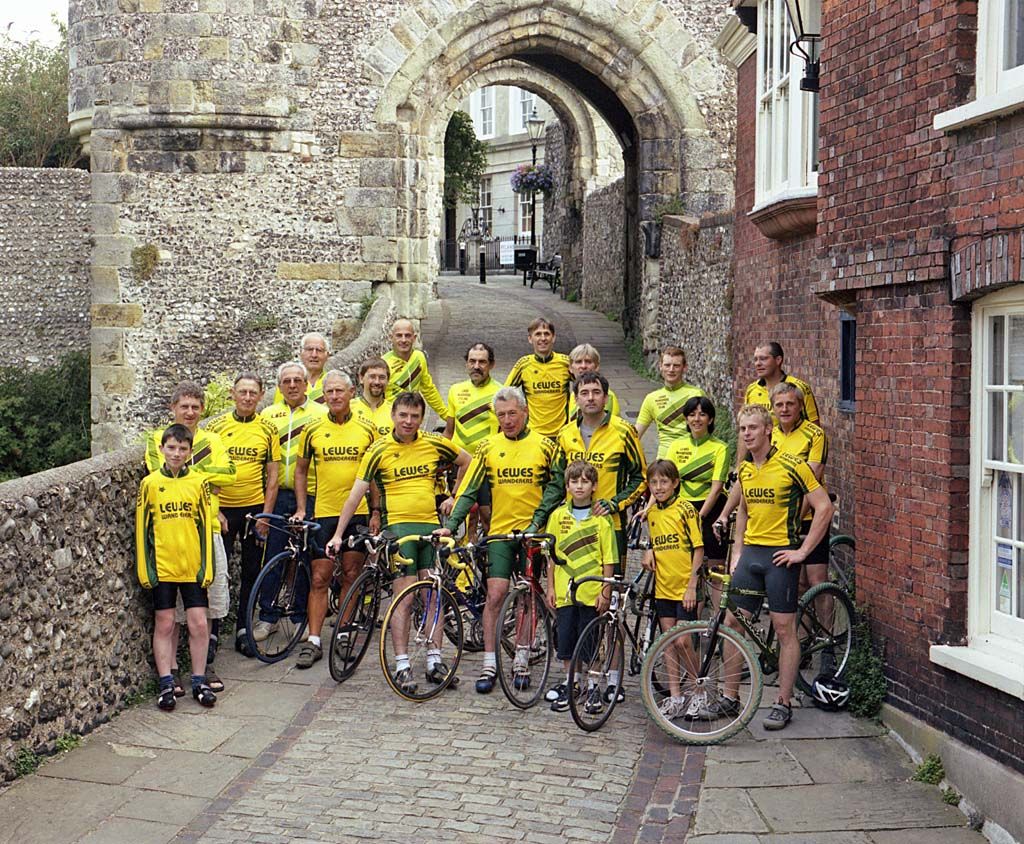 Outside Lewes castle in July 2004. 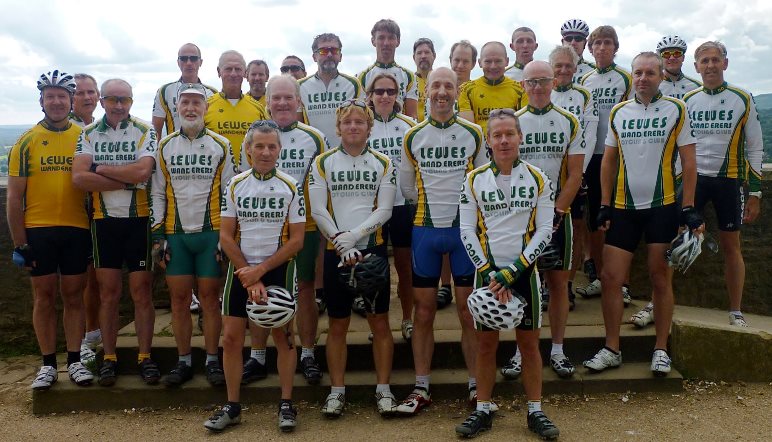 The club was reformed in 1950 after the Second World War and in 1951 a young Mick Burgess took over as secretary until he was called up into the army. He returned from National Service in 1955 and remained at the centre of club life for the next 50 plus years. Mick Burgess sadly passed away on August 30th 2008 aged 74. Over the years Mick helped, supported and encouraged several generations of club cyclists and was dearly missed

Beside his Wanderers role, Mick was a major character in the East Sussex Cycling Association (ESCA). He took over as racing secretary in 1976 and continued in that demanding role until ill health forced him to stand down in July 2008. He organised and MC’d the ESCA awards lunch held in January 2008; an event attended by over 100 people from across the East Sussex cycling community. He also attended the Wanderers awards lunch in February 08 (photo below shows him presenting Mick Hills with the Merit cup); this was sadly to be Mick’s final appearance at a club event.

Along with all his practical work for both ESCA and the Wanderers, Mick was a passionate cyclist who loved time trialling and racing. He raced at all distances and amongst his many successes and club championships, he won the Lewes Best All Rounder (BAR) competition in 1979. Health issues curtailed his racing performances after May 2004, but he continued riding socially and on club runs for a couple more years before finally being forced to give up his beloved bike. 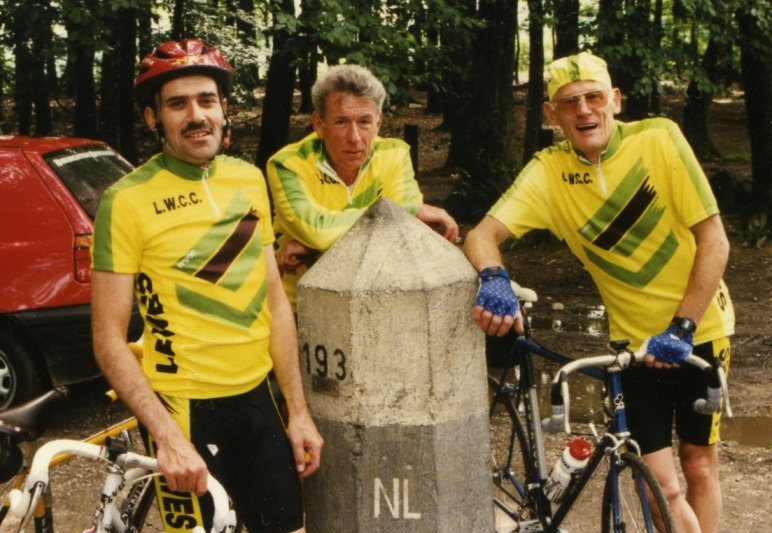 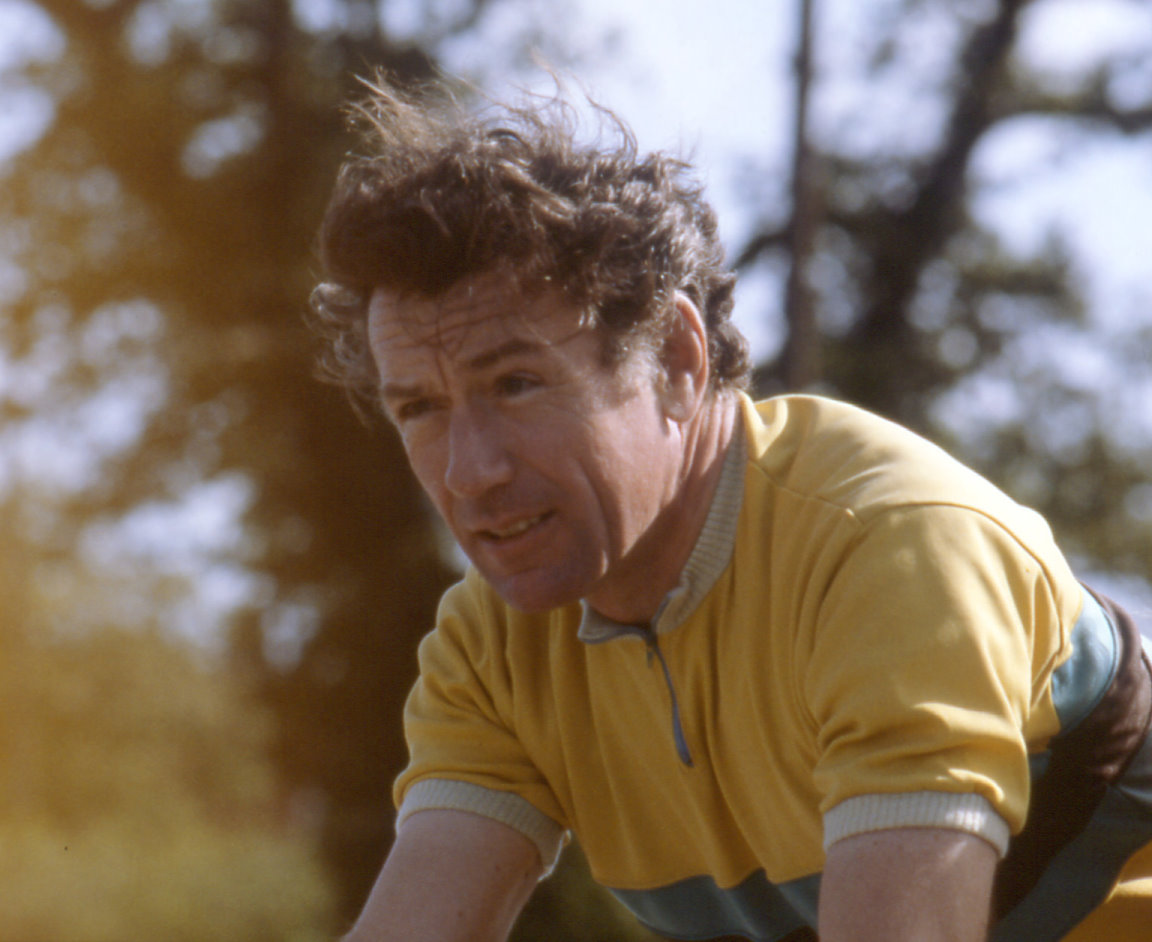 At the AGM in January 2009 Chris Martin was voted in as Chairman having already held a number of committee roles, including social secretary. During his tenure he successfully launched the club magazine and weekly press releases in 2006 and built the original club website in 1998. Chris' proudest cycling moment was in 1999 when he came 5th overall in the national 24-hour time trial championship with 438.173 miles. Chris stepped down as Chairman in August 2017. 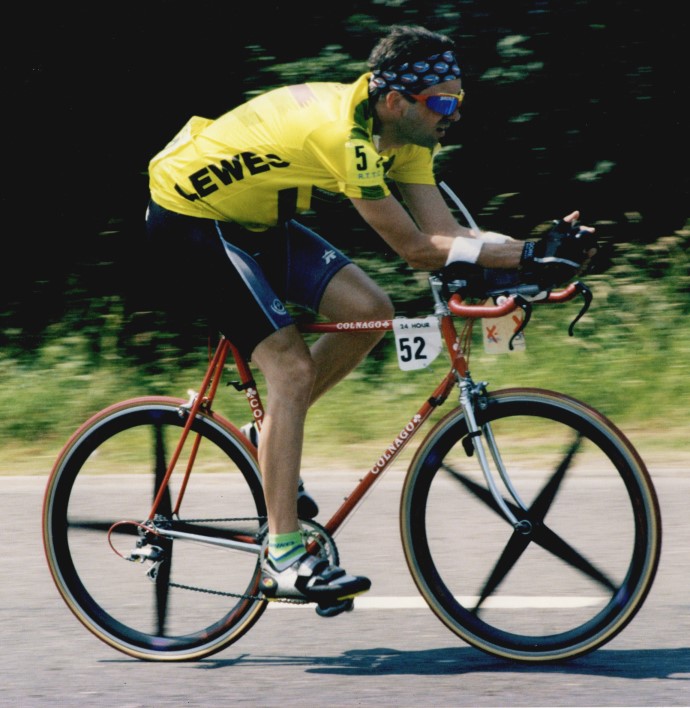 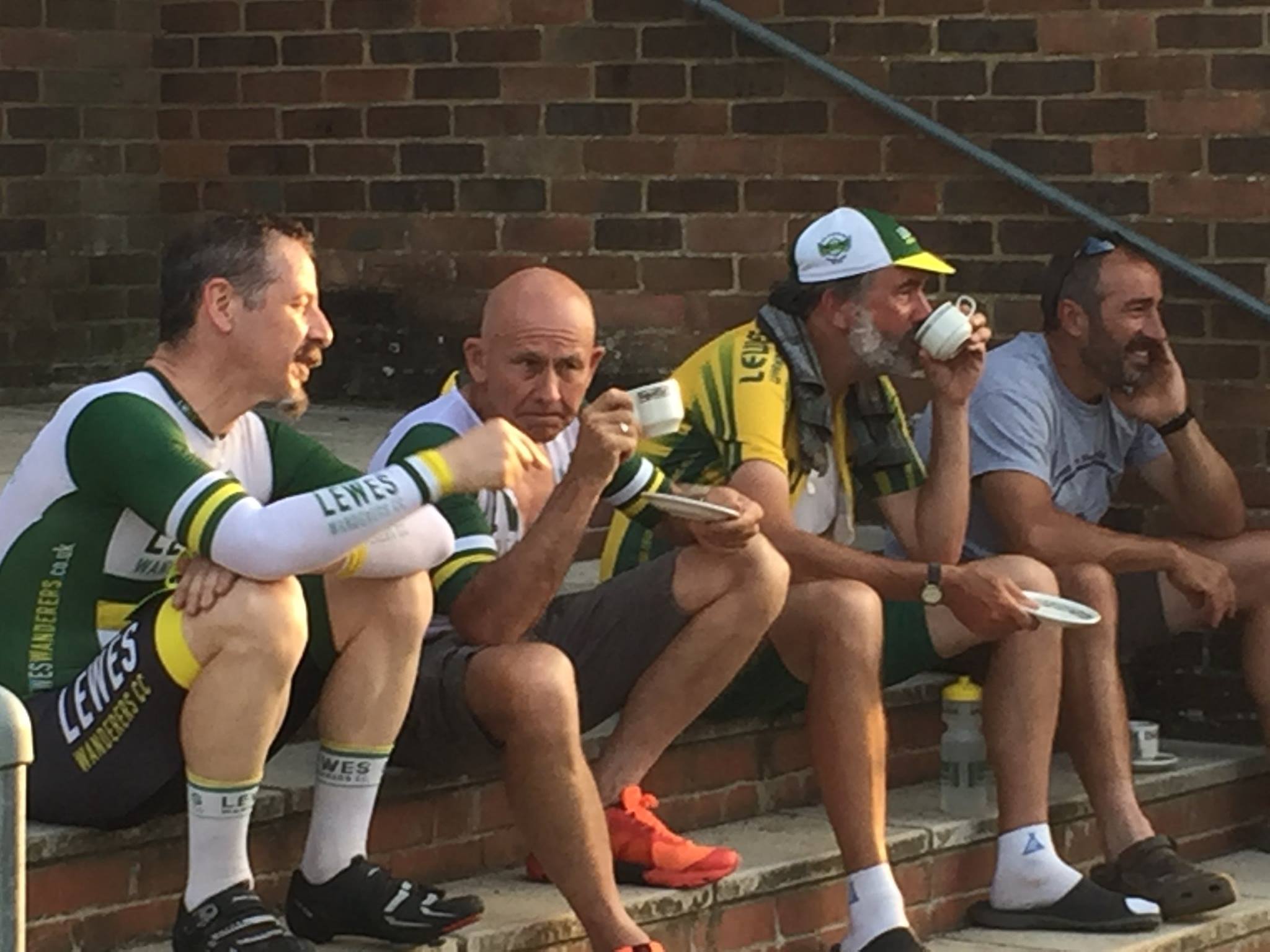 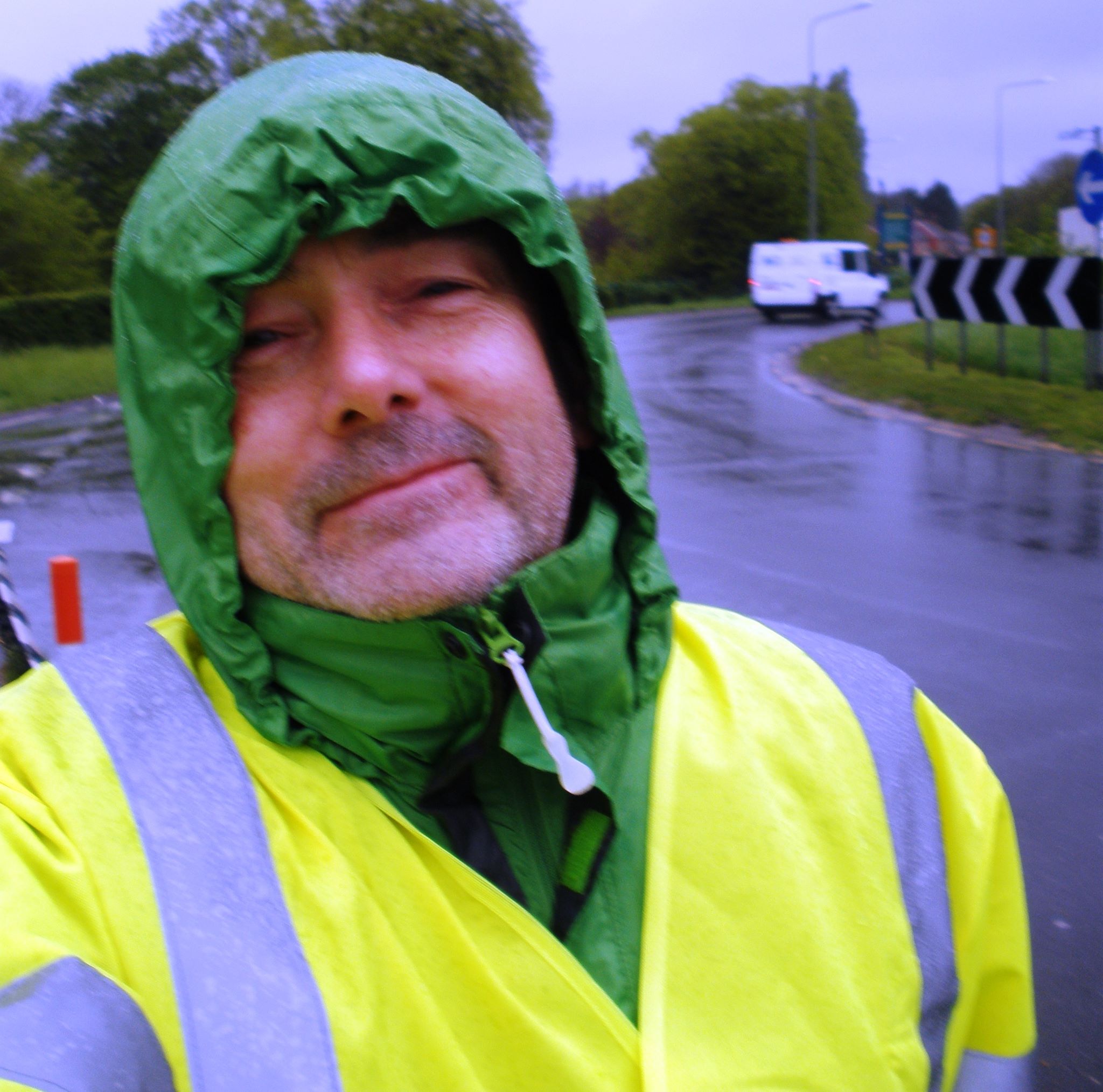 The current Chairman is Dom Lowden who was voted in at the 2018 AGM. Dom has been an active club member since 2008 participating in TT’s, road racing, CX and club runs, as well as running TT events and organising club annual training trips. 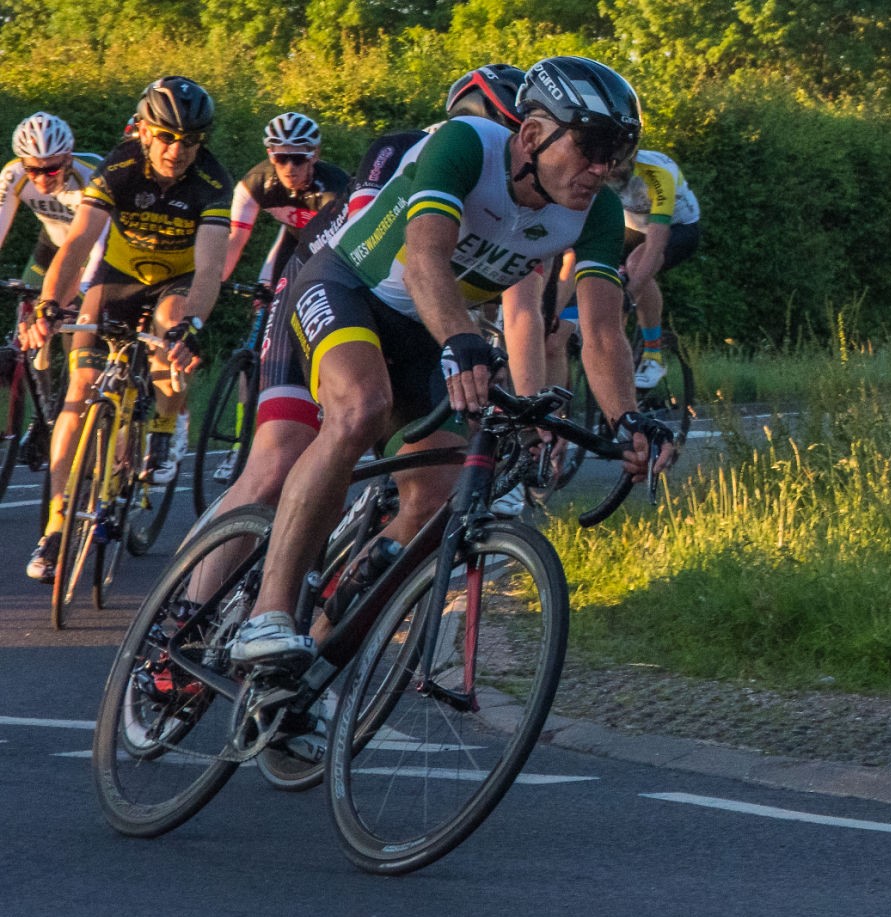 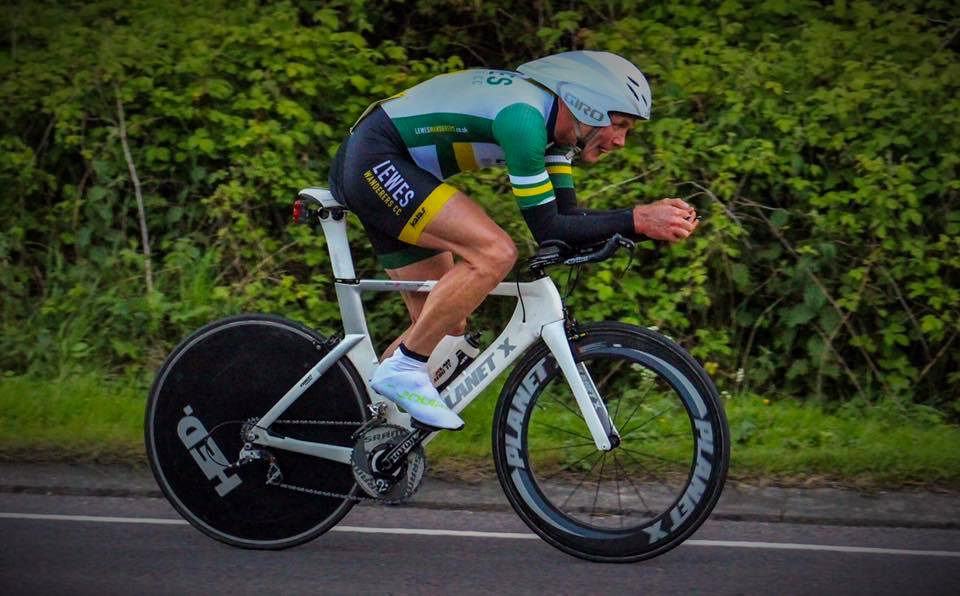 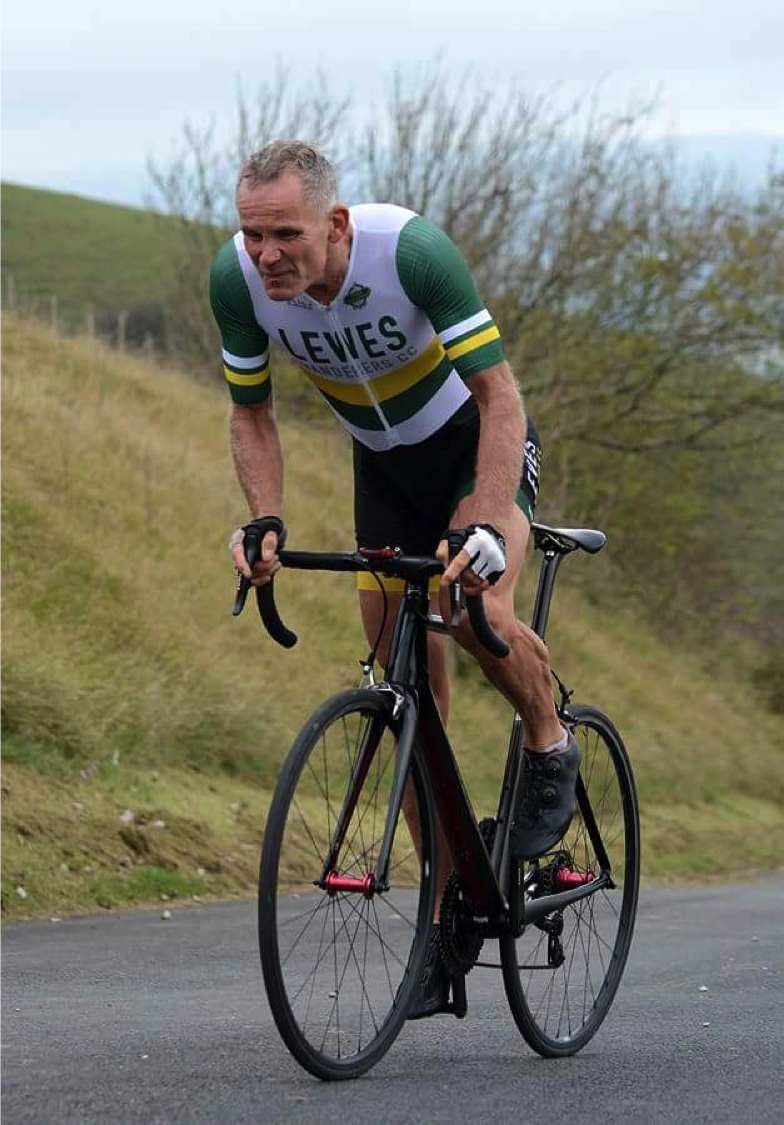