The culmination of the Kinesis UK London and South East Cyclo Cross season took place at Ardingly Showground on Sunday 10th February.  The Team Championships were promoted by Crawley Wheelers and they devised a course, perhaps by necessity, different to anything run at the venue before, indeed possibly quite unlike anything ridden by any of the riders before.

Instead of weaving between the hurdles of the equine cross-country course out in the fields the racers were directed through both outdoor and indoor sand schools more normally used by horse-riders to exercise their steeds; all linked by tarmac roads with just a short excursion on a muddy track through a copse.  Not only was the course unusual, but the format was untried also with the results of a 15 minute race determining the grid positions for the half-hour main race. 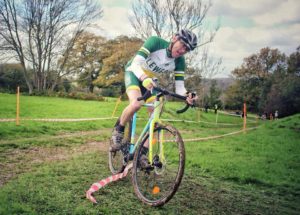 Lewes Wanderers A and B teams were already on the backfoot before they started with both reduced from four to three riders due to ill health and home commitments.  The A Team could still boast one of the top riders in his age group in Dan Street, supported by fellow forty-somethings Darren Haynes and Rob Pelham. The B Team was led by stalwart Stephen Burgess along with new recruit Andrew Booty, also amongst the over 50s, and the under-50 Richard Frost competing in his first event of the season.

Dan Street made a good start and proceeded to complete five more consistently fast laps to finish 28th overall out of the 145 male and female riders involved in the mass start.  Darren and Rob got caught up in the traffic, but Darren finally found his rhythm to improve to 82nd at the flag, one lap down on the leaders as 99th placed Rob was. Between them the A Team ranked 20th out of the 32 teams to be classified.

Sadly Lewes Wanderers B Team was not amongst those as while trying to plough through one of the sand pits Andrew Booty suffered a collision with another rider which caused part of his handlebars to work loose and he stopped on the fourth lap out of safety concerns.  Stephen and Richard kept plugging away though with Stephen actually finishing one place ahead of the A Team’s Darren in 81st and Richard in 123rd.