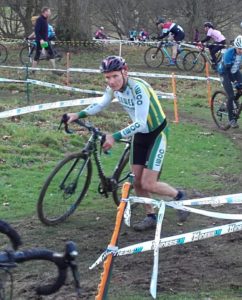 Club Chairman Dom Lowden was the only Lewes Wanderer to journey north during the festive period purely to race his bike.  The event in question was the League of Veteran Racing Cyclists National Cyclo Cross Championships on Friday 28th December.  The race itself was held in the grounds of Venture Sports, an outdoor activity centre on the outskirts of Warwick on a course that was predominantly flat save for one short killer climb.

In cycling terms ‘Veteran’ indicates over the age of 40; all the same it must have been something of a disappointment to the organisers that only 44 riders took to the mass start early that afternoon and two of those failed to finish.  Dom wasn’t one of them, but he failed to recover from a slow opening lap when he somehow managed to take a wrong turn and leave the course and which left him 6th of the seven riders in the 60-64 age category. Despite getting faster with every lap he lost that position on the fourth of the seven laps he completed and he finished 32nd overall, two laps down on the overall victor.