Round 10 of the Kinesis London and South East Cyclo Cross League was held on the afternoon of Saturday 22nd December in the magnificent grounds of Somerhill School, Tonbridge.  Promoting club Southborough and District Wheelers had devised a spectacular course utilising the full range of elevation change available and made even tougher by heavy midweek rain leaving the grass slick and the mud gloopy.

On what was a pleasantly mild and sunny afternoon four Lewes Wanderers put themselves forward to tackle this challenge.  Due to their similar results in the past year Paget Cohen and Darren Haynes were gridded alongside one another on the 5th of nine rows in the race for men in their forties.

A tentative start and and the first of many minor offs that almost all riders experienced left Paget last of the 65 starters on the first lap, while Darren also lost ground to lie 51st.  Darren slipped another couple of places on the second tour while Paget had recovered to have his clubmate in his sights three places ahead. Paget powered past Darren on the next circuit only for another off and a slipped chain to allow Darren to nip back past.  It was only temporary though, as while both had now been lapped by the leaders, Paget fought his way up to 51st by the chequered flag with Darren crossing the line two places and just under a minute later following an unfortunate tangle with one of the leaders while being lapped. 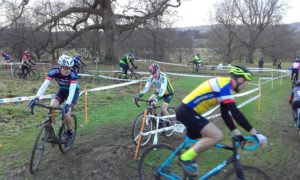 In the following contest for men over 50 Stephen Burgess carved through the field of 52 starters to lie in 33rd place, just two places ahead of Dom Lowden at the end of the first lap.  Dom made his move on lap two as he gained seven positions while Stephen dropped a couple and decided to take advantage of a spare and clean bike awaiting him in the pits.Both made up one further position before the end of the four lap race with Dom coming 27th and Stephen in 34th and a lap down on the winner.

Paget has now accumulated seven finishes this season and can afford to drop his worst result of 55th should he manage to finish higher in any of the two remaining rounds in the new year as only the best seven results count.  He still lies behind Dan Street in the overall standings as Dan is 22nd with 362 points (out of a possible 600) from 6 races to Paget’s 268 (46th). Darren is 54th with 224 points from 6 events, while Rob Pelham lies 95th out of 188 riders to score points with 107 from 3 rounds.