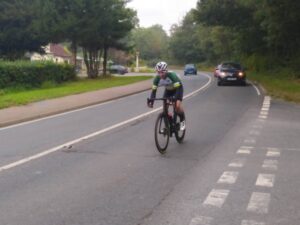 Lewes Wanderers were the hosts for a 17.58-mile time-trial over a lumpy course on Sunday 26th September.  The Circuit of Chailey begins near the village hall heads down and then up Cinder Hill to meet the A272, turns left into North Chailey, then left at the second of the mini-roundabouts down the A275 all the way to the Peacock Inn.

A hairpin-turn sends the competitors up Deadmantree Hill and along Town Littleworth Road to Markstakes Lane.  The inevitable left turn takes the racers past the finish line for the first time, while a second left to rejoin the A275 gives them one more lap to complete.

The sun was obscured by cloud cover, but the roads were dry and there was no significant breeze to affect the eight men to take to the start line.  Winner by a clear margin was Joe Benians who sped round in 43 minutes and 45 seconds.

Peter Kilby was the lone Wanderer to head north to Leith Hill in Surrey to participate in the Kingston Wheelers Hill Climb on Saturday 18th September.  His time of 5 minutes and 35 seconds placed him 43rd out of 49 finishers.