For some reason Lisa was the only female entrant so only had to finish to collect the prize money, but she did far more than that as she sped round in 26 minutes and 32 seconds to beat half of the male contingent in placing 19th of the 37 finishers.  Brett’s time of 24:19 gave him a fine 8th place.

On Bank Holiday Monday it was time for the 25 mile event over two-and-a-half laps of the same course tackled two days earlier.  Once again Lisa was the only female competitor, but she more than exceeded her performance on Saturday. Her time of 1 hour, 5 minutes and 58 seconds placed her 10th of the 25 finishers and only four places behind her husband Brett who was 6th in 1:00:40.

The first round of the Kinesis UK London and South East Cyclo Cross League was held on Sunday 2nd September.  The event was promoted by VC Jubilee, held at Stanmer Park Brighton and well supported, not least by Lewes Wanderers who had seven racers competing across the various categories. 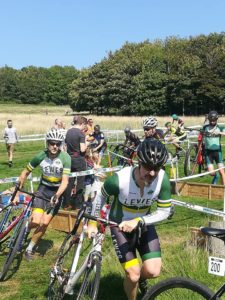 First of the Wanderers to compete were the quartet of males in their forties, of whom debutant Dan Street was undoubtedly the star of the show.  In the absence of previous results to grant him a grid position he began at the back, but by only the second of the six laps had passed all of his team-mates and he finished in an excellent 26th position and on the same lap as the leader.

Rob Pelham and Darren Haynes both suffered spills that cost them time and broke their rhythm allowing Paget Cohen to work his way past and finish best of the rest in 41st of the 90 starters.  One of Darren’s tyres actually came off the rim on the very last bend, but he still crossed the line in 46th, four places ahead of Rob.

In the following race for gents over 50 Stephen Burgess was a solid 39th out of 58 with Alan Lester on the same lap in 48th.  Having missed most of last season due to injury Patrick Hough was also forced to start from the back in the final race for men born before 2000, but he sliced his way through the field of 77 riders to finish in a phenomenal 6th place.

Having qualified thanks to their performances in the Tour of Cambridgeshire road races earlier in the summer husband and wife Dom and Christine Lowden took their places on the starting line for the UCI Gran Fondo World Championships road race in Varese, Italy that same morning.

Over a mountainous 105 kilometre course Dom finished in 3 hours 4 minutes and 30 seconds to place 56 out of 170 men in the 60-64 age group.  Christine completed the same course in just 34 seconds outside of four hours to claim 14th out of the 22 in the equivalent category for women.

Eastbourne Rovers CC hosted a 10 mile time trial along the A22 on the cool,…