The new year kicked off with it’s traditional local curtain-raiser and a new member of Lewes Wanderers was the club’s sole competitor.  As they have for many years Southborough & District Wheelers ran a 10 mile time-trial on their rolling A28 course near Bethersden and Andrew Booty was one of 67 athletes to take to the start line.  His time of 27 minutes and 35 seconds left him 47th of the 64 finishers. 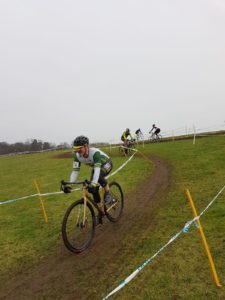 Despite a more nearby event in the London and South East Cyclo Cross League on the same day Darren Haynes found himself in Bury St Edmunds with his race machine on Sunday 6th January and so took part in the ‘Stow Scramble’.  Round 14 of the Eastern Cyclo Cross League was held in the extensive grounds of Haughley Park and offered open field and forested sections, off camber bends and steep slopes for the competitors to negotiate.

Without any previous form in that competition on which to base a grid position Darren was forced to start from the back of the 68 entrants in the race for men in their forties.  Unsurprisingly he was among the 45 riders to be lapped by the leaders, but at the end of his five laps he did win a three-man sprint to claim 47th out of the 65 finishers.