Despite the final counting event having taken place as far back as Sunday 29th October 2017, the final standings for the Sussex Cyclo Cross League were not released until Boxing Day.  This series is open to all those who are registered as living in Sussex and is based on their best three results from those rounds of the London and South East Cyclo Cross League which take place in Sussex.  This past season that amounted to four rounds – Stanmer Park on 3rd September, Happy Valley Recreation Ground, Woodingdean on 1st October, Ardingly Showground on 22nd October and an alternative circuit at Happy Valley to complete the series.  Best showing by a Lewes Wanderer came from Rob Pelham who placed 10th in the category for men in their forties. Behind him Paget Cohen was 17th just one place ahead of Darren Haynes, Richard Frost was 24th and Jon Collett 25th of the 43 qualifiers.  Amongst the over 50s Stephen Burgess finished 16th, Dom Lowden 25th and Chris Hough 28th of 30 scorers, while amid the under-40s Nick Smith came 23rd and Patrick Hough 34th out of 34 to be counted. 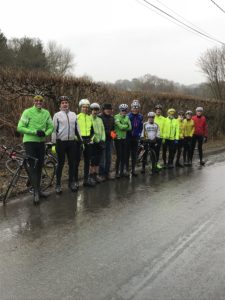 Round 1 of Lewes Wanderers’ annual three-legged Reg Porter competition back in December was carried out in heavy rain and gale force winds and as such attracted only five competitors.  Conditions for Round 2 on Sunday 21st January were hardly much better as while there was little wind the temperature was barely above freezing and yet more rain fell.  Given the weather and that only handful of riders still harboured ambitions at triumphing in the overall competition it was a tribute to the hardiness of the club’s riders that 14 of them convened at the summit of Stone Hill, just south of Horam, to freewheel down and see how far they could get up the next hill before rolling to a halt.  Of the four clubmen who contested Round 1 the runner-up, and last year’s overall victor, Rob Pelham came out on top ahead of Michael Turner, who was 4th in the opening round.  Winner of that leg of the competition Ian McGuckin came 5th behind Paget Cohen and Darren Haynes, who didn’t participate in Round 1, while previous 3rd place man James Geldart finished 7th behind Brett Davis.  For those interested in such matters it was noted that for their own personal reasons each of the quartet rode a frame constructed of a different material; for the record titanium triumphed over carbon with steel beating aluminium for the final spot on the podium.  Round 3 - the Speed-Judging - will take place on Sunday 25th February when Rob will carry a narrow advantage over Micky and Ian with James still holding an outside chance of overall victory.