It is perhaps to be expected, but conditions were far from ideal for the Sussex Cyclists Association hill climb up the formidable Steying Bostal on the morning of Saturday 3rd October with a gusting wind and steady rain falling.  Ed Tuckley did best of the brace of Lewes Wanderers to take part stopping the watch after 5 minutes 45.2 seconds of lung-busting effort to finish in 25th ofthe 35 entrants. Seven places behind was Roger Hutchings in 6:07.8

With the London and South East Cyclo Cross League still having not resumed any Lewes Wanderers looking for some offroad racing action had to head look elsewhere.  One man prepared to go the extra miles was Darren Haynes who headed about as far east as possible to take part in Round 1 of the East Kent Cyclo Cross League held in the grounds of Sandwich Technology on Sunday 4th October. 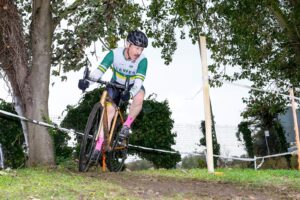 With Storm Alex due to make an appearance and a number of additional procedures to adhere to in order to keep the participants safe, such as a pit area for spare bikes or equipment, it was perhaps little surprise that only 39 other men in their forties  took to the start line alongside Darren.

Thankfully the wet weather didn’t make an appearance until the second half of the 45-minute race, but without many appearances in this league Darren wasn’t afforded a high grid position and had to start in the rear half of the grid.

From making a couple of places at the start Darren put in some consistently quick laps to pick up a few more up until the closing stages when the rain arrived slowing just about everyone as the mainly grass course became increasingly slippery, but definitely suiting some more than others.

On the last lap Darren put in one last effort to overhaul the rider in front.  He didn’t quite manage it, but his effort was sufficient to cause a faster rider closing him down to overcook it on the last bend allowing Darren to cross the line in 18th from the 39 finishers.