Round 12 of the Kinesis UK London and South East Cyclo Cross League on Saturday 4th January was due to take place in Bexley, only for the venue to become unavailable. Thankfully Crawley Wheelers stepped forward and not only offered to promote the round, but managed to secure the grounds of Ardingly Showground in order that those exponents of the discipline could get their fix.  They enjoyed bright sunshine for the racing, but it was a raw day and the grassy sections of the course were sticky to put it mildly.

Just as at the last round of 2019 Lewes Wanderers’ only entrants in the race for men in their forties were Dan Street and Darren Haynes.  Dan made a cracking start and was up to 17th place at the end of the first circuit, but paid for his early exertions as his lap times thereafter fell away and he lost half-a-dozen places the next time around and eventually slipped to 27th place at the flag, one lap down on the winner. 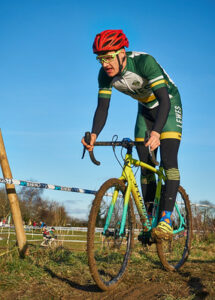 Similarly Darren got away well to be 35th at the culmination of the opening circuit, but he too lost six places the next time around.  He lost another place on lap 3, but was up to 33rd a lap later. He eventually crossed the line back in 35th place out of the 58 starters with a solitary non-finisher.

By contrast Dom Lowden’s race in the following event involving men over 60 was dull by comparison as he put in a series of five consistent laps and maintained 5th place from the seven entrants throughout, albeit 1 lap down on the winner.

In the final race of the afternoon for men under 40 newcomer Joe Benians, like those before him, saw his lap times slip at the race progressed.  However while 23rd from the 38 starters at the conclusion of the initial circuit, he rose as high as 22nd the following time around, but was never lower than 24th which is where he finished at the end of 8 laps, 2 laps down on the victor.