The annual Road Time Trials Council Closed Circuit Championships took place on Sunday 11th October and was promoted by Antelope RT..  The circuit in question was Thruxton Motor Racing Circuit near Andover in Hampshire of which competitors were required to complete 5 laps totalling 11.7 miles.

Four members of Lewes Wanderers took part with arguably the best performance coming from young Anya Tamplin racing for URDT.  She sped round the rolling former perimeter road to what was originally a World War Two airfield five times in 27 minutes and 10 seconds.  This was good enough to place 20th overall female and third fastest aged 18 to 22.

Two places behind and 4th in the over-40 age group was Sally Turner in 27:28.  47 seconds behind and 7 places back was Sally’s trianSharp clubmate Lisa Davis who was 6th overall in the same category.  Lisa’s husband Brett (trainSharp) was 58th out of 194 men to finish in 24 minutes and 51 seconds.

Darren Haynes was back in off-road action that lunchtime in Round 2 of the East Kent Cyclo Cross League - the Grand Prix Alex Paton - held in the grounds of Astor College, Dover and promoted by VC Deal.

On what was a gloriously sunny October day Darren completed half-a-dozen consistently quick laps, but finished a lap behind the victor in the race for men in their forties in 23rd out of 41 finishers. 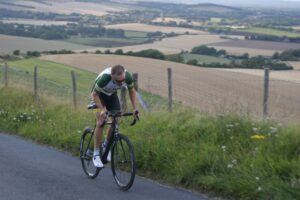 A trio of Lewes Wanderers were among a field of 44 plucky entrants for the East Sussex Cycling Association up the formidable Firle Beacon on the morning of Saturday 17th October.

Quickest of the three was Joe Benians who placed 15th in a time of 4 minutes 41.6 seconds.  He was ably supported by 19th placed Dan Street with 4:54.7 and Ed Tuckley who rode fixed-wheel to 5:22.5 seconds and 30th place.  Between them they fell just 0.3 seconds short of beating Southborough and District Wheelers to the team prize.

Joe was back in action the following morning over considerably flatter terrain, but some 25 times the distance.  He came 23rd out of 72 finishers in the Brighton Mitre 25-mile time-trial, but more impressively reduced his personal-best for the distance by almost three minutes to a new mark of 58 minutes and 23 seconds.

Also racing over the same distance on the same day were husband and wife Brett and Lisa Davis and trainSharp clubmate Sally Turner.  They were up near Newmarket competing in the Road Time Trials Council Circuit Championship (London East DC).

Sadly Brett had an “off” after approximately 20 miles.  He wasn’t seriously hurt, but the bike sustained some damage and he decided not to continue.  Lisa and Sally escaped such misfortune and completed two laps of the triangular course in 1:02:23 and 1:00:54 respectively as they took 9th and 15th places.

In what is likely to be her last competitive ride for the club, and certainly…