Bank Holiday Monday 28th May dawned dry, hot and sunny which was just as well as Lewes Wanderer Michael Valks was on the start line for one of Brighton Mitre CC’s morning of 10 mile time-trials at a little after a quarter-to-seven and he was by far not the first rider off.  Michael was competing in the ‘Road Bike 10’ for machines without the benefit of tri-bars, disc wheels or aerodynamic aids and he raced up and down the A283 course near Steyning in 25 minutes and 19 seconds to finish third of the six riders to compete in that category.

Not much more than half-an-hour after he crossed the finish line he was lining up again in the so-called ‘Bling 10’ for full time-trial specific bikes.  It goes to show how much advantage is gained from such aids as, despite some inevitable fatigue, he now completed the same course in 24 minutes and 17 seconds to finish 27th of the 41 competitors.  His father Paul also competed and recorded a time of 27:36 while Gina McGeever was one of eight females to take to the line and her time of 24:51 was good enough for 5th place.  At the sharp end Lewes riders Nick Dwyer and Rob Rollings scooped second and third places on the podium thanks to their blistering times of 20:39 and 20:49 respectively.

Rob Rollings’ powers of recovery were also put to the test that same evening for Round 4 of Lewes Wanderers own 10 mile time-trials, but they passed with flying colours as he posted his fastest time so far with a 21:07 to maintain his 100% winning record.  Runner-up for the fourth time was the ever-consistent Brett Davis in 21:39, while Mark Frost bagged third thanks to his 22:10. Rob Pelham might have challenged him for that but the mount for his cycle-computer came apart mid-ride and he stopped to recover the device from the road before it could be run over and so didn’t post a time. 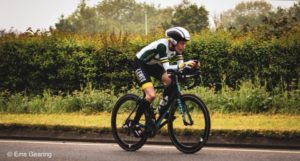 There was a new winner amongst the ladies with 13th placed Clare Parkholm crossing the line in 25 minutes and 28 seconds, just 2 seconds outside her personal best; however runner-up Kate Mankelow (15th) reduced her PB by 11 seconds to 25:39 and third placed Sue Collett (17th in 26:02) reduced hers too by 29 seconds.  The improvements weren’t confined entirely to the ladies as Richard Burchett and Neil Gearing who finished joint 9th in 24:25 improved by 45 seconds and one second respectively, 12th placed Geoff Letts equalled his best mark of 25:25 and Roger Hutchings cut his best set just a week ago by 22 seconds to 28 minutes dead as he finished 21st of the 22 to pass the timekeepers.

Winner amongst the ladies of the first three rounds Lisa Davis was back in action on the evening of Wednesday 30th May as she and husband Brett managed to secure much sought after places in the a3crg 10 on the superfast A3 course near Liphook in Hampshire.  They both seized the opportunity with both racing mitts as Lisa set a new ladies club record for the distance of 22 minutes and 39 seconds in finishing a most impressive 3rd among the 13 female entrants. Brett too beat his personal best by over a minute in reducing it to 20:27 and placing a highly respectable 21st out of 79 overall.

Rob Pelham sought to make up for his DNF in Monday’s Lewes 10 by competing in Eastbourne Rovers equivalent event on the same course on the evening of Thursday 31st May.  He made some amends in recording a time of 22 minutes and 36 seconds which was good enough for 7th of the 14 racers. In 11th place was clubmate Paul Hanratty who improved on his time of Monday by 16 seconds in posting 27:22.

Closer to home, or at least back on the same A3 Hampshire based course that Mr & Mrs Davis on excelled along on Wednesday night, Peter Baker finished 36th of 92 finishers in the Portsmouth North End 25 on Sunday morning thanks to his own new personal best time of 56 minutes and 17 seconds.