Lewes Wanderers heavily truncated race programme for 2020 concluded with the Circuit of Chailey time-trial on Sunday 27th September.  This 17.58 mile test against the clock starts near Chailey Village Hall, immediately sends the riders north-eastwards down and then up Cinder Hill to meet the A272.

A left turn sends them west to the mini-roundabouts in North Chailey where a second left takes them down the A275 past where they started.  They then complete two laps of a triangular course with it’s southern apex at the Rainbow pub, where a sharp left sends them up the aptly named Deadmantree Hill.

Thankfully for the 29 entrants to tackle such a rolling technical route the weather was dry if cloudy and cool and a stiff tailwind to be enjoyed down the A275, even if it would be in their faces on the northbound legs. 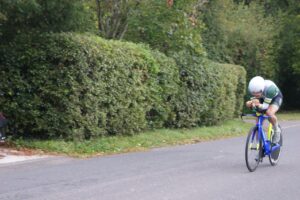 Winner in a time of 41 minutes and 32 seconds was Steve Kane (Team TMC), but he was joined on the podium by two superb rides from members of the host club.  Runner-up on the day was Joe Benians in a fabulous 43:34 with Dan Street claiming third in a swift 44:46.

Up in Leicestershire that same morning a quartet of Lewes Wanderers members, albeit racing for other clubs, were competing in the prestigious Road Time Trials Council National 25-mile Championship.

Joss Lowden (Drops) added to her National Hill Climb Championship of 2017, her bronze medal in the World Mixed Team Relay in Yorkshire and her National 10-mile Championship also in 2019 by storming to the ladies title in a time of 52 minutes and 14 seconds; over half a minute ahead of the runner-up.

Lisa Davis (trainSharp) clearly also coped well with riding into the wind on the outward leg as she was 15th female overall and fastest in her age group in 1:01:13.  Sadly her clubmate Sally Turner dropped her chain after 22 miles of effort and, with the adrenaline still no doubt pumping, was unable to re-engage it and had to abandon her ride when possibly on pace for a medal.  Lisa’s husband Brett, also trainSharp, was a fine 63rd from 113 male finishers in 53:13.

Nineteen riders, including three guests, turned out for Round 3 of Lewes Wanderers’ summer series…