The third and final round of Lewes Wanderers’ Reg Porter Trophy took place on Sunday 23rd February. The competition was effectively reduced to a two-horse race between joint leaders Rob Pelham and Paget Cohen before it had even begun.  Closest challenger, and winner of Round 2, James Geldart was away on holiday and with only seven riders braving the wet and windy conditions of Storm Ellen, but with next nearest contender Dan Street being eight points behind, he could only triumph should neither Rob nor Paget finish.

As ever the challenge was to ride two laps at as near to the designated speed as possible, crucially without the aid of a handlebar mounted cycle-computer of any kind, which were required to be temporarily removed. Usually the first fairly flat loop of 2.31 miles and the second 4.21 mile circuit are to be completed at different speeds, but this year for a change head timekeeper Richard Meed dictated that both be ridden at an average of 11.5mph.

Set off at 30-second intervals Rob actually led at the end of the shorter loop, being just 22 seconds outside of the target time.  It was still all in the balance though as Dan Street was 29 seconds early, Ian McGuckin half-a-minute too slow, Paget Cohen and Stephen Burgess equal on being 43 seconds too fast and David Wilkins was 58 seconds too quick.  While Peter Baker really overcooked it as he was 1 minute and 55 seconds ahead of schedule.

The second circuit was markedly harder and not just because the route sent riders up towards the wind turbine and then plunging down the steep hill past Glyndebourne Opera House, but the initial flat stretch along Potato Lane and Gote Lane round the back of Ringmer were into the teeth of a gale while the “return leg” up Moor Lane and Neaves Lane enjoyed a generous tailwind.

Somehow Stephen Burgess was only 7 seconds too fast round this second loop and in doing so won the round with a total time differential over the two laps of 50 seconds.  If Dan Street had known to put in a sprint finish he may well have taken the spoils as he was 24 seconds too slow round this lap and thus 3 seconds behind Stephen on aggregate. 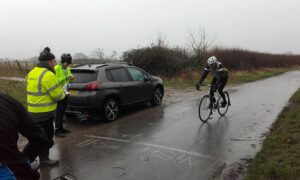 Rob Pelham was 1 minute and 2 seconds out of time on this circuit, but this was good enough for 3rd in this round and for him to retain the overall trophy as Paget Cohen was 1:37 too fast and his combined time of 2:20 left him seventh and last in this event and runner-up to Rob in the overall for the second year running; with Dan Street claiming third.

Ian McGuckin finished 4th in the event with a combined time of 1 minute and 50 seconds, ahead of David Wilkins (2:06) and Peter Baker (2:07) who at least fared much better on lap 2 as he was but 12 seconds ahead of schedule.

Down at Preston Park, Brighton that same day Lewes Wanderer Kate Parrish finished second of five 3rd and 4th category females by less than half a wheel in Round 1 of the Sussex Cycle Racing League Winter Series.