Round 2 of Lewes Wanderers Reg Porter Trophy took place on Sunday 19th January.  Disappointingly while the morning was bright, dry and sunny the thermometer reading hovered around zero, and what with many roads still wet from midweek rain the threat of ice no doubt deterred all bar the most determined of riders from taking part.

Five of them rode out from Uckfield to be joined by two others who made their own way to where the action was due to unfold - on Harvey’s Lane, near the former Bentley Wildfowl and Motor Museum.  Sheet ice on the one corner on the intended course enforced a truncated event, but it was the same for everybody.

As ever the challenge was deceptively simple - to start at the top of a hill, and strictly without pedalling, get as far up the next incline as possible before coming to a halt.  The winner being the rider to get the furthest which generally favours those with the right combination of weight, but with low aerodynamic drag and rolling resistance. 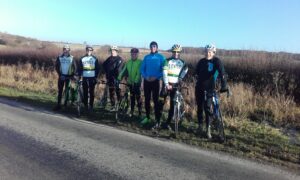 The Freewheelers by Sophie Street

Champion for the day and for the first time was James Geldart, who had only minutes before come a cropper on the aforementioned ice, but picked himself up to win by yards.  Runner-up was Paget Cohen who finished a matter of inches ahead of Rob Pelham and Stephen Burgess with David Wilkins 5th ahead of Dan Street and Ian McGuckin.

Going into the final Round - the Speed Judging on 23rd February - Paget and Rob are tied in the overall standings a single point ahead of James, with David and Dan still in with a mathematical chance of claiming the silverware.

Two days earlier father and son Dom and Jamie Lowden took extreme measures in search of conditions conducive to cycling, to the Liwa region of the United Arab Emirates no less.  They both competed in a mass start road care of 66.61 miles in which Dom finished first among the three males aged over 60 and Jamie was a fine 9th among the men aged between 24 and 39.