Ten Lewes Wanderers took part in the East Sussex Cycling Association Hardriders time-trial on Sunday 15th March.  The race was run in dry conditions, but showers before the start and heavy rain in the weeks before left the course damp in places and with deep water-filled potholes in others.

If the road conditions weren’t testing enough the 15.06 mile course is always a challenge as it’s called the Hardriders for good reason.  From the start just south of the Bodle Street Green Village Hall headquarters the course is fast downhill towards Windmill Hill and the first of several steep ascents.

The rolling section along the A271 through Boreham Street is probably the easiest part of the course, but once having turned north back into the lanes the course barely offers the riders any time to relax.

After a long and steep ascent to Woods Corner they would then enjoy a steep plunge to Earls Down before a slow drag up to Three Cups. The left turn to Rushlake Green is downhill, but at the expense of being back on minor roads littered with imperfections to put it mildly.  From Rushlake Green a sequence of yet more ramps and descents lead back to the finish.

Only four women took part, but Lewes Wanderers claimed two of the podium positions with Kate Thomas in second (and 29th overall) in a time of 49 minutes and 51 seconds and Anna Dwyer in third (32nd overall) in 51:07.  They weren’t the only Wanderers to sample success as Vince Busk may have been 37th overall in 55:11, but that was fastest among the over 65s. 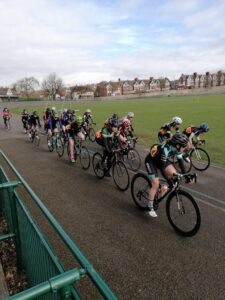 In the rather more benign, but no less frantic, surroundings of Preston Park Velodrome in Brighton several female Wanderers had been taking part in the Sussex Cycle Racing League Winter Series.

In Round 1 on Sunday 23rd February Kate Parrish took a fine second place in a race of 5.  A week later in Round 2 Kate finished 10th out of 13 behind fellow-Wanderer, but racing for URDT, Kathryn  “Mugs” Gohl who claimed 6th.

Kate regained the upper hand in Round 3 when she took the third step on the podium while Mugs was one of a pair of non-finishers from a dozen starters.  Anya Tamplin (also representing URDT) was 11th out of an impressive turn-out of 20 for Round 4 on Sunday 15th March.

It is perhaps to be expected, but conditions were far from ideal for the Sussex…