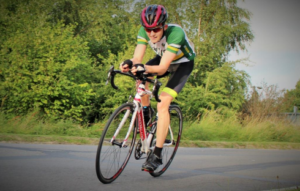 Only 25 riders, 21 from the host club, took to the start line for Round 10 of Lewes Wanderers evening 10 mile time trials on Monday 3rd July.  Only 24 finished, given that Charlie Middleton suffered a puncture before he’d even reached the Boship turn, but his son Callum at least stayed the course even if this week his time of 21 minutes and 53 seconds left him a scant 1 second behind the victor Tom Glandfield.  After last week’s glut of sub-22 rides these were the only two this week although 3rd placed Brett Davis (22:01) came mighty close.  The only personal best on the night came from 7th placed Cameron Cragg (23:27) who took a further 16 seconds off his ever-improving mark.  With his sixth ride he became the 20th competitor to qualify for the overall competition which Tom still leads narrowly from Brett although a few others may come into the reckoning if they put in fast times in the last two rounds.

A raft of fast times in time trials this year earned Lisa Davis a coveted spot in the a3crg 25 mile event on the A3 in Hampshire on the evening of Wednesday 5th July, an event renowned for the quality of the field and for fast times.  She took full advantage of the opportunity as, while 52nd of the 66 finishers and 7th of the 11 females might not sound that impressive, she took nearly 6 minutes off her personal best set just a few months ago and her time of 58 minutes and 10 seconds also beat the three year old club record by 41 seconds.

The following night was a disappointing one for Lewes Wanderers in the return leg of their annual inter-club 10 mile time-trial competition against local rivals Eastbourne Rovers.  For various reasons they were without three of the six men who had given them an advantage of 3 minutes 42 seconds from the home leg on 26th June, but a dozen riders journeyed to Pevensey to pit their abilities against 25 from the Eastbourne.  At the sharp end of proceedings there were strong performances from Tom Glandfield (2nd, 21:45), Brett Davis (4th, 22:01), Rob Rollings (5th, 22:02) and Gavin Richards (11th, 22:36), but lack of depth told and despite a fine 23:17 from Dan Street and a personal best 23:21 from Martin Baddeley it was all in vain as the hosts overturned the disadvantage to the tune of just 5 seconds.  Also competing under the Lewes banner were Peter Baker (23:37), Darren Haynes (24:38), Rich Streeter (25:43), John Mankelow (25:53), Chris Martin (25:54) and Kate Mankelow (26:31).

There were three Lewes Wanderers in a large field for the Epsom CC 25 mile event on Sunday 9th July.  Brett Davis and Rob Rollings were one of ten duos to ride it as a 2-up and they performed admirably coming away with 2nd place thanks to their time of 53 minutes and 55 seconds.  John Mankelow rode solo and finished 50th of 59 who did so, but his time of 1:04:21 was his fastest for some 10 years.  Not quite beating her new club record, but still achieving great things was Brett’s wife Lisa.  She and Peter Baker were among over 100 athletes competing in the National 100 mile championships near Alton, Hampshire, promoted by Hounslow & District Wheelers.  Lisa finished 9th of the 18 females to finish in 4:27:06 while Peter’s 4:24:44 placed him 55th among the males.