Peter Baker was the sole Lewes Wanderer competing in the Crawley Wheelers Cycling Club 10 mile time trial on the morning of Saturday 8th July. His time of 23 minutes exactly placed him 24th of the 57 finishers.  He was no doubt one of many hoping to test themselves over the same distance two days later in Round 11 of his own club’s series of events, but the roadworks that had blighted the same event the Monday before returned almost a week later and left the organisers with no option but to reluctantly cancel the race only a few hours before it was due to start.  With only one round left 20 Lewes riders have qualified for the overall championship based upon their 6 best rides, but three more can still qualify including Callum Middleton who, with a fast time, could yet leapfrog current leader Tom Glandfield and close runner-up Brett Davis and steal the crown. 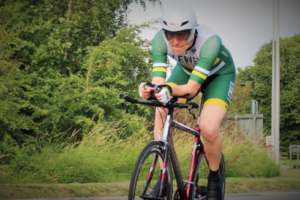 With their own event called off Wanderers had to look elsewhere for racing action in the week.  On Thursday night Sam Ramsey had a go at Eastbourne Rovers brutal 14.4 mile time-trial comprising 2 laps of the Birling Gap/Beachy Head circuit.  Sam’s time of 40 minutes and 22 seconds placed him 13th of the 20 to last the course.  Paget Cohen left the relative comfort of tarmac to compete in Round 3 of the Bedgebury Forest CC Summer XC Race Series.  Unlike Round 2 he successfully stayed upright and avoided hitting any trees, but at the end of an hour’s racing he found himself one lap down on the winner and 11th of 13 racers in the male over-40 age group.  Later that afternoon up near Newmarket Lisa Davis was one of 98 riders ploughing up and down the A11 in a Shaftesbury CC promoted 50 mile time-trial.  In blowy conditions her superb time of 2 hours 4 minutes and 50 seconds took over 6 minutes off her personal best and 4 off the previous club record.