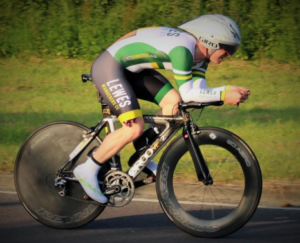 Monday 26th June wasn’t just Round 9 of Lewes Wanderers’ Evening 10 mile time-trial series, but the first leg of the annual inter-club competition versus Eastbourne Rovers.  With the fastest six riders from each club to count the call was put out early for as many as possible to attend and the host club responded well with 30 racers signing on, while 12 members of the opposition made the short journey from the coast to the East Hoathly start-line.  Quickest overall was the visiting Howard Shaw who covered the course in 20 minutes and 55 seconds, just 3 seconds ahead of Pete Morris representing the home team.  Eastbourne’s Mark Edwards was 3rd in 21:17, but behind him Lewes riders occupied the next five places and all beating 22 minutes.  Callum Middleton (21:27) took a further second off his personal best of just last week and he was followed in quick succession by Sean Quinney (21:44), Rob Rollings (21:49), Brett Davis (21:52) and Tom Glandfield (21:56).  All of which gives lewes a healthy 3 minutes and 42 seconds advantage going into the return leg on Eastbourne’s Pevensey course on Thursday 6th July.  Also setting personal bests for Lewes were Aidan McConville (22:31), Dan Street (22:33), Cameron Cragg (23:43), Jon Collett (24:42) and Rich Streeter (25:27).  However the evening wasn’t a complete success as many rider’s times were compromised by the authorities deciding to start road-works on the Dicker midway through the event, it being something of a lottery as to whether a competitor had to stop for temporary traffic lights once, or in some cases twice and thereby ruining any chance of a competitive time.

17 year old prodigy Cameron Cragg was back taking it to our local rivals on the evening of Thursday 29th June as the only Wanderer amongst 23 Rovers on their tough 7.2 mile Birling Gap loop.  His time of 18 minutes and 45 seconds may only have placed him 7th, but he broke the junior record for the course and for the climb to Beachy Head in the process.

Those Wanderers who had committed in advance to time-trialling on the morning of Sunday 2nd July suffered the misfortune of the last of the overnight rain putting a dampener on proceedings.  On the outskirts of Herne Bay on the north Kent coast Nick Dwyer's storming time of 21 minutes and 6 seconds placed him 7th of 95 in the Veteran Time Trialling Association Kent Group 10.  Meanwhile the Wessex Group of the VTTA were holding their 50 mile championship near Liss on the A3 promoted by Blazing Saddles.  Tom Glandfield's fine time of 1:49:34 was only good enough for 25th of the 104 finishers, while Peter Baker came 71st (1:58:18).

Back in Sussex Lisa Davis's time of 2:11:11 in the Sussex Cycling Association 50 gave her 16th of the 31 competitors, 2nd overall female, a personal best and an SCA record.  That afternoon and back in Hampshire Callum Middleton was first of 56 across the line in the Pedal Heaven Farnham Festival of Cycling circuit race promoted by VC Meudon.

Circuit of Chailey and racing round-up

Lewes Wanderers were the hosts for a 17.58-mile time-trial over a lumpy course on Sunday…