The third of Lewes Wanderers’ series of 10 mile time-trials was held on the hot evening of Monday 21st May and that heat was reflected in the times with a third of the host club’s riders to compete setting personal bests.  Rob Rollings triumphed overall for the third round in succession, but with his best time so far of 21 minutes and 25 seconds. That improvement was necessary as Brett Davis also posted his fastest time so far with a 21:35 just 4 seconds outside his personal best, but he had to settle for runners-up spot just as he had in the first two rounds.

Behind them Mark Frost just (22:11) just beat Rob Pelham 22:17 to third spot on the podium while 5th placed Martin Baddeley 23:19 shaved 2 seconds off his PB.  8th placed Lisa Davis remained unbeaten in the ladies competition, but more importantly ducked under 24 minutes for the first time with her 23:51 beating 18th Sue Collett (26:41) into second place. 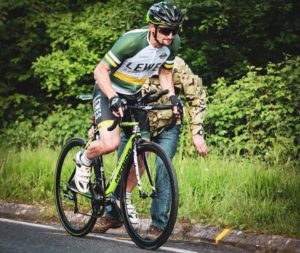 Others to show improvement were 11th placed Paul Fletcher (24:28) who took 26 seconds off his best; 16th placed Rich Streeter (25:23) who clipped 4 seconds off his previous mark and Graham Faultless in 17th who improved by a massive 49 seconds on his time from Round 1.  There were gains made throughout the field as 22nd Roger Hutchings (28:22) took 59 seconds off his time from last week and Tony Clarke (25th in 34:28) upped his pace by 42 seconds.

The rescheduled Lewes Wanderers Circuit of Laughton time trial was finally held on the evening of Wednesday 23rd May after it was originally postponed due to the threat of icy roads.  It is testament to Nick Dwyer’s club record of 27 minutes and 41 seconds for the 12.46 mile course set back in 2011 that it lasted seven years and took the event to be held on a warm summer’s evening rather than it’s traditional early March morning slot before it was broken and then only by 8 seconds.

The rider to do it was that man Rob Rollings again (27:33), closely followed as usual by Brett Davis who tied for 3rd place with Nick as they both recorded 27:44, with Brett taking 4 minutes and 38 seconds off his personal best in the process.  It was only third place as a new outright course record was set by one of three guests among the field of 33 - James Rix of Team Bottrill who sped round in 26 minutes and 11 seconds. Somewhat ironically Nick was one of only three Wanderers to have raced the course before and not set a new personal best, not including poor Simon Yates who attempted the course on fixed wheel, but abandoned when his chain came off.

They weren’t the only ones to register new course records as 15th placed Lisa Davis slashed 5 minutes and 5 seconds off her personal best in reducing the ladies mark from 33:05 to a highly impressive 30:55.  Runner-up among the ladies and 23rd overall Clare Parkholm (32:54) took over two minutes off her PB and also snuck inside the old course record.