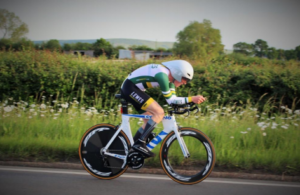 Conditions for Round 3 of Lewes Wanderers series of 10 mile time-trials on Monday 15th May were the best so far and thus not only brought out the largest entry yet, but a flurry of fast times and personal bests.  The threatened rain failed to materialise leaving a warm muggy evening with only a relatively slight crosswind for the test along the A22 from East Hoathly to the Boship Roundabout and back.  Behind three guest riders, including former Wanderer Pete Morris (ASL), Tom Glandfield became the first rider from the host club to break the 22 minute barrier in this season’s competition with a fine 21:58, but he was only 14 seconds ahead of the fast-improving Callum Middleton, who shaved a huge 25 seconds off his previous best.  Last week’s victor Brett Davis may have been relegated to 6th place this week, but he too hacked a relatively massive 28 seconds his PB with a new mark of 22:21, while 11th placed Aidan McConville (22:56) broke 23 minutes for the first time and 11th placed club-mate Gavin Richards equalled his best of 23:20.  There was success all the way down the field of 35 as 20th placed Vince Busk (24:54) ducked under the 25 minute barrier for the first time and Rich Streeter carved a huge 4 minutes and 42 seconds off the best time he had previously managed in his fledgling TT career, reducing it to 27:37.  Lisa Davis (25:49) was a single second off her best, but importantly 47 seconds ahead of Kate Mankelow, the only other female entrant.

In amongst all the racing against the clock a handful of Wanderers participated in some shoulder-to-shoulder racing directly against other human beings.  On Friday 19th May Nick Smith and Darren Haynes competed in Round 2 of the Hove Park Crits on the closed tarmac circuit in Preston Park with both finishing just outside the top ten.

The following day your correspondent took part in his first ever mountain bike race.  Round 2 of the Bedgebury Forest Cycling Club Summer XC Series was a 75 minute race over a 1.6 mile course a short way away from the technical red trails and family-friendly blue trails at that facility.  Starting at the rear of the 27 man field for those aged over 40 your correspondent was immediately left behind off the line, but recovered to put one competitor behind him on the first lap only to undo his good work by sliding off on one of the boggy sections.  He reclaimed that position on the next lap then for the next few laps the only thing he was rubbing shoulders with were the trees as he tried to learn the course and then became over-confident and started riding too fast for the slippery conditions and his limited experience.  Shortly after halfway he had some company in the form of the leaders starting to call from behind looking to pass, but on the last lap he finally caught and overtook some very tired stragglers, some of whom, judging by how they moved aside, clearly mistook him for one of the front pack, such is the advantage of at least looking the part in the very smart green and white Lewes kit.  Provisional results placed your correspondent 20th of the 24 finishers.

The following morning the South Winchester Park-and-Ride car park was the somewhat unlikely venue for Round 1 of Velo Club Venta’s quartet of summer criterium races.  Lewes man Callum Middleton was in third place going into the last corner of the 50 minute race around the 0.4 mile circuit only to overcook it and come down, fortunately without injuring himself nor any of the other competitors.