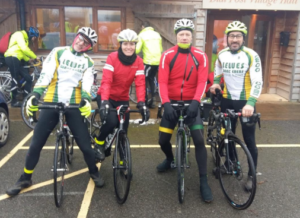 If anyone ever questioned the resolve of Lewes Wanderers cyclists those doubts were surely dispelled on the morning of Saturday 11th February.  If navigating ones way around 60 miles of lumpy West Sussex and Surrey lanes weren’t challenging enough those plucky souls entered for the Worthing Winter Warmer Audax faced near freezing temperatures and sleet if not snow blowing into their faces every time the route turned north.  If that weren’t sufficient four of the club’s five entrants – Peter Baker, Lisa Davis, John Miller and Michael Turner – rode out from and back to their homes in East Sussex, more than doubling their distance ridden, while Nick Smart-Jones contented himself with just completing the allotted course on a day when few others were bold enough to even venture out on two wheels.

The following morning the snow may have dissipated, but it was still damp and barely any warmer for the third and final round of Lewes Wanderers’ annual Reg Porter Trophy.  Going into the final event – the speed judging – there were only five riders in contention for the overall title so, given the conditions and with so little for many to play for a turnout of a dozen was commendable.  At 9:45am organisers and time-keepers Bob Comben and Richard Meed were ready and waiting at the junction of Neaves Lane with Potato Lane on the outskirts of Ringmer in order to temporarily confiscate handlebar mounted cycle-computers and to issue instructions to those up for the challenge.  For 2017 this would involve one anti-clockwise lap of 2.41 miles to be completed at 14mph then a 4.21 mile lap, including the descent past Glyndebourne Opera House, to somehow be completed at an average of 12mph.  Expert arbiter on the day was Dr Stuart Anderson who somehow nailed the first lap to the second and was only 29 seconds over time around the lap 2.  14 seconds too fast on lap 1 was Tony Gale, who was again too fast to the tune of 35 seconds on the second tour, but that was good enough to make him runner-up.  Martin Baddeley was 28 seconds too quick on the initial loop and just 23 seconds late around the second.  Unfortunately for him it is cumulative difference that is counted, but  his 3rd place on the day elevated him to 2nd in the overall standings, while Rob Pelham's 7th place was enough to clinch the overall title for the 2nd time, with Stephen Burgess (10th) dropping to 3rd.  Once everyone had completed the course and been accounted for it was a quick dash to the home of club-mates Anne and Peter Baker who generously provided refreshments and a quick calculation of the results respectively.

Callum Middleton was the sole representative from Lewes in The Redhill CC Sporting 18 on the morning of Sunday February 19th.  On a lumpy course through the hills south-west of Dorking he did the club proud with a fine 14th place out of the 51 starters in a time of 44 minutes and 31 seconds.  That same morning Michael Valks and John Mankelow were two Wanderers in a field of Rovers for the Eastbourne club’s first 10 mile time trial of the year.  Michael came 9th in 24 minutes and 46 seconds, while John was 25th of the 37 finishers in 27:12

Evening 10s Round 12 and racing round-up