With Storm Doris having blown over Lewes Wanderers were free to fly over the weekend of 25th and 26th February.  On a cool and blowy Saturday Dominic Lowden and Bob Evans travelled up Gravesend Cyclopark to participate in Round 1 of the Abellio-San Fairy Ann promoted Spring Criterium races run under the auspices of the League of Veteran Racing Cyclists. As the name implies this is racing geared towards allowing those no longer in the first flush of youth, indeed open to those of 40 years and over.  Dom competed in a race which featured riders aged from 50 to 60, but found himself on the wrong side of a split in the bunch caused by the wind as much as the pace.  He chased across the gap seemingly without success only to find himself victorious among those in the 55 to 60 sub-category.  Bob rode in the event for those over 60, but unfortunately without troubling the podium.

The following morning young Callum Middleton headed in the opposite direction in order to compete in Round 4 of the Preston Park Crit; also promoted by the busy Abellio-SFA RT organisation.  Unlike his elder club-mates Callum was sufficiently on the ball to get away early in a 3-man break-away that worked sufficiently well together to gain a lap on the rest of the field.  Bronze medal position was the best he could manage however as his break-away companions outfoxed him in the finishing sprint. 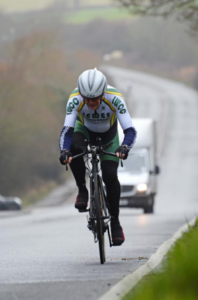 Further east along a south coast still being battered by rain and strong winds, John Mankelow took to his time-trial rig for the second of Eastbourne Rovers’ 10 mile events down the A259 from Pevensey to Little Common and back.  With a return leg straight into a headwind conditions were far from ideal; John’s time of 26 minutes and 51 seconds placing him 15th of the plucky 20 combatants.