Results from Round 1 of the Kinesis UK London and South East Cyclo Cross League promoted by Brighton Excelsior CC and VC Jubilee and held at Stanmer Park on Sunday 3rd Sept were published just too late for last week's press report, but when they arrived they made for encouraging reading for Lewes Wanderers.  There were actually eight Wanderers in action as Nick Smith competed in the category for those born between 1977 and 1999 and he finished on the lead lap in 44th of the 78 competitors in that race.  Stephen Burgess also finished on the same lap as the leader in the race for those aged over 50 and in 33rd of the 80 competitors.  There was a huge field of 116 riders, of which six were representing Lewes, trying to make their way round the course in the event for those aged 40 to 49.  Rob Pelham was one of the last to be lapped by the leaders and he finished exactly midfield in 58th position.  Paget Cohen was a minute behind in 72nd, Darren Haynes fought back from a tyre becoming separated from its rim on the opening circuit to place 87th.  Alan Lester and Richard Frost were 94th and 96th respectively, while debutant Jon Collett just failed to break the top 100 (101st). 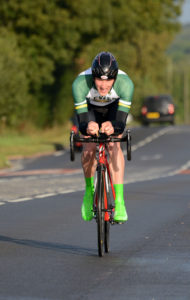 Those riders pitching up for the East Sussex Cycling Association 10 on the morning of Saturday 8th September didn't quite get what they had bargained for as temporary traffic lights on the A22 a short distance east of the proposed East Hoathly starting line dictated revised start and finish points and a truncated course of 6.1 miles or nearer 10 kilometres rather than the 10 miles they had planned for.  As such several entrants, including five from Lewes decided not to bother although nine Wanderers still took to the start line.  Fastest of those was Nick Dwyer who completed the short course in 13 minutes and 10 seconds to finish 4th overall, but he was only one second and, unsurprisingly, one place ahead of team mate Stephen Comben.  With Rob Rollings (13:30) placing 7th Lewes must have thought they had a shout at the prize for fastest team of three, but were pipped by 9 seconds by Eastbourne Rovers who placed riders 1st, 8th and 10th.  Also beaten into 2nd by a Rover was Lisa Davis in the female category.  Although her time of 14:52 was good enough for 23rd of the 55 finishers, Sue Collett (17:16) was 7th of the nine ladies to race.  Also competing were Brett Davis (9th in 13:37); Peter Barling (27th, 14:58); Michael Valks (31st, 15:05) and Paul Valks (46th, 16:47).

By the following morning the roadworks had gone, but a cold mist shrouded parts of the course for the ESCA 25.  Much like the day before there were five Wanderers non-starting, but 10 did pit their talents against the stopwatch.  Again Nick Dwyer proved the quickest, his time of 54 minutes and 43 seconds granting him 6th place overall.  Once more he was followed on the leaderboard by Stephen Comben (8th, 56:09) and Rob Rollings (10th, 56:30) and once more that trio were denied the team prize by their South Coast rivals, albeit by an increased margin from the day before.  On this particular day Lisa Davis (1:01:33) had to settle for 3rd fastest female and 33rd overall, while Clare Parkholm (1:07:04) was 52nd and 8th of the nine female competitors.  Others to race were Brett Davis (13th in 57:09); Michael Valks (1:01:58, 34th); Peter Baker (1:04:34, 47th) and Paul Valks (1:13:16, 56th).