Having had to miss the previous round due to exams Patrick Hough was back in action on Sunday 29th January for the 13th and last round of the Cyclefit London and South East Cyclo-Cross League at Cyclopark ‘Badlands’ Gravesend promoted by Bigfoot Go-Ride. Despite recent rain the course was not as muddy as some and the Lewes rider also benefitted from a good start reasonably high up on the grid.  From 10th position at the end of lap 1 he gradually made his way up to 5 by the end of the 4th of 11 laps.  With two riders streaking off into the distance to contest the victory he spent the remainder of the race embroiled in a four man dice for the final place on the podium.  With two laps to complete Patrick had that place in his sights, but fatigue caught up with him on the last lap and he crossed the line in a highly respectable 5th.  Patrick placed 28th in the final league standings for those under 40 years of age, but would surely have been in the top 10 had he contested more than the 5 events he was available for.

Lewes Wanderers’ Tom Glandfield kick-started his time-trial season in the South Downs Bikes / Casco Pet Race Team event on Sunday 5th February.  This ‘sporting’ (read hilly) test against the clock begins in Storrington and heads west through Amberley before climbing to the Whiteways Lodge Roundabout.  The route then joins the A29 as far as the outskirts of Fontwell before turning back east along the A27 dual-carriageway to Arundel.  Taking the first exit at the next roundabout leads the competitors north up a stiff climb back to the Whiteways Lodge Roundabout, from where they return to the start.  On a cool damp morning Tom’s time of 53 minutes and 50 seconds for the 21 mile course was good enough for 18th place among the 50 starters, with one non-finisher. 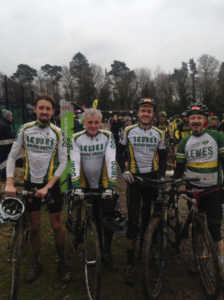 That afternoon a quartet of Wanderers formed one of 37 teams in the Cyclefit London and South East Team Championships held at Great Walstead School near Lindfield.  On a course made slick by midweek rain and muddy by the combined tyre tracks of more than a hundred riders Patrick Hough repeated his fine form of the week before with a fine 4th place among the 132 starters.  On his debut at the discipline, and on a machine borrowed from Patrick’s father Chris Hough, Dan Street performed admirably only to suffer a snapped chain.  The rules of Cyclo-Cross allow riders to leave a spare bike in the pits should they wish so Dan was able to run round to rejoin the fray on his own mountain bike.  Dan narrowly failed to avoid being lapped by the leaders for a second time, otherwise he may well have finished ahead of his more experienced team-mate Darren Haynes in 83rd position, rather than seven places back.  The club’s fourth representative was the evergreen Stephen Burgess whose 105th place left the group in a more than respectable 17th place.