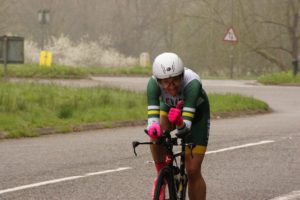 A quartet of Lewes Wanderers crossed the border into West Sussex on the morning of Sunday 15th April for the Southern Counties Cycling Union 25 mile time-trial.  In doing so they provided half of the four female entrants for this event out of a total field of 58 riders. In cool and cloudy, but thankfully dry conditions all four Wanderers were some five minutes off their personal bests on a somewhat rolling course along a sequence of A-roads north-west of Horsham, but still achieved creditable results.

Strong performances from the two Lewes ladies allowed them to claim the second and third places on the podium.  Lisa Davis passed the chequered flag after 1 hour, 3 minutes and 57 seconds of all-out effort for 34th place overall, but finished agonisingly just 4 seconds behind her fastest female rival.  Gina McGeever took 3rd among the ladies and 43rd position overall thanks to her time of 1:08:13. Lisa’s husband Brett once more beat ‘the hour’ and his time of 58 minutes and 15 seconds was good enough for 11th place, while clubmate John Mankelow was 48th in 1:11:43.