Due to the cancellation of the Circuit of Laughton in light of the threat of icy March roads Sunday 8th April's Circuit of Danehill became the effective curtain-raiser for Lewes Wanderers' season of time-trial events.  There was no ice in evidence post-Easter, but there was a steady penetrating early morning drizzle that meant the 19 riders to compete were granted poor visibility and unexpected puddles to dodge in addition to the greasy roundabouts to negotiate on their 18.1 mile odyssey.  From Chelwood Gate they would race south down the A275 past Sheffield Park to North Chailey then back anti-clockwise along the A272 via Newick and Piltdown, before the final leg north up the A26 through Nutley and across the Ashdown Forest to Wych Cross.

Fast times were at a premium, but the two Wanderers to beat their previous personal bests were amply rewarded by winning the male and female categories.  Brett Davis continued his scintillating spring form and improved on his performance of 12 months ago by six seconds and one position to triumph in 44:57 ahead of Rob Rollings (45:14), Nick Dwyer (45:21) and Mark Frost (46:29). 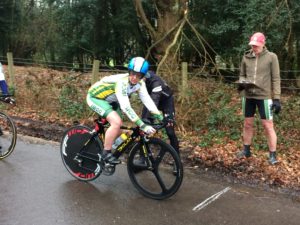 There were only two female entrants, but Kate Mankelow similarly continued in her rich vein of early-season form to reduce her PB by over half-a-minute to 54:26.  Second fastest female Sue Collett (59:29) was one of half-a-dozen club members to race the course for the first time and thereby set a mark to aim at in 2019.

It was far from a Good Friday in terms of weather conducive to time-trialling with cold rain falling for Crawley Wheelers sporting 41.6 mile event that morning.  As such 21 of the 81 entrants, including two of the five Lewes Wanderers to pre-enter, were no-shows and four of the 60 starters failed to finish. Of the three Wanderers to brave the elements and the rolling course Gina McGeever achieved the best result as she took runners-up spot amongst the three female entrants thanks to her time of 2:05:21.  Aidan McConville covered the course in 1 hour 51 minutes and 27 seconds to place 29th out of 56, while Peter Barling was 44th in 2:03:51.

Not to be deterred Peter was back in action again on Easter Monday in the Brighton Mitre ‘Hilly’ 25 mile event in equally dismal conditions, as evidenced by 16 of the 34 entrants not starting.  His time of 1:15:47 placed him 13th of the 16 riders to cross the finish line.

The annual Lewes Wanderers Reliability Trial was held on the morning of Sunday 27th January.…