Lewes Wanderers annual Hill Climb took place on the evening of Monday 3rd August.  Twenty competitors had pre-entered via the Club’s website, but only 18 turned up with 13 representing the host club.  Just for once the sun was out and more importantly the wind was favourable for an ascent of the vicious slopes of Firle Beacon, but with sections of greater than 10% racing was still far from easy. 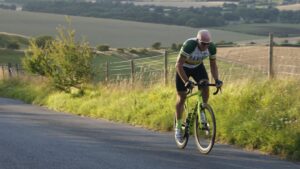 Alan Lester fell agonisingly 1.98 seconds outside that mark while John Mankelow stopped the watch after 7:08.57.

Rob had clearly rested well as just the previous morning he had participated in the Sussex Cyclists Association 50-mile time trial.  Not only that, but he went straight on at one of the numerous roundabouts on the course and by the time he had realised and turned around he had ridden an extra couple of miles.  Otherwise he was almost certainly on course to break two hours.  As it was he had to settle for 33rd place from the 53 finishers in a time of 2 hours 7 minutes and 55 seconds.  8 places behind was clubmate Peter Baker in 2:09:46.

Back on Sunday 26th July Sally Turner (representing trainSharp) had taken part in the a3crg Glorious Goodwood time-trial when her time over 5 laps of the motor-racing circuit of 27 minutes and 14 seconds had left her 5th of the 19 female competitors.  She returned the following Sunday for another round of the same, improved by over half-a-minute to 26:43 and this time took the spoils ahead of 10 other racers.