The illustrious Road Time Trials Council National 10-mile Championship took place on Sunday 30th August and half-a-dozen Lewes Wanderers had qualified.  Sadly defending champion Joss Lowden was unable to take the start, but in her absence her club mates did her proud.

This year’s event was held in Berkshire on a stretch of the A4 between Newbury and Hungerford and indeed was promoted by Newbury Velo Cycle Club.  Racing for trainSharp Sally Turner stopped the watch after 22 minutes and 31 seconds of effort to place 20th female overall and 4th fastest veteran (over 40).

Relatively speaking Anya Tamplin (URDT) went one better.  Her time of 22:46 gave her 26th overall, but 3rd place on the podium for espoirs (under 23 riders) and a massive personal best.  In her first appearance at this level Anna Dwyer performed admirably in placing 52nd in 24:39. 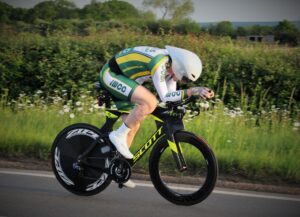 The competition was certainly stiff amongst the men as both Brett Davis (trainSharp) and Nick Dwyer put in strong rides that weren’t reflected in their finishing positions.  Brett’s 21:02 granted him equal 96th place with Nick 10 spots behind in 21:10.

Sally and her trainSharp team-mate Lisa Davis were back in action on Bank Holiday Monday in the Sussex Cyclists Association “sporting” 25-mile time-trial.  Sally tamed the rolling roads near Loxwood in a new course record of 1 hour 2 minutes and 15 seconds.  Unsurprisingly she took the victory with Lisa a clear second in 1:04:24.

Back on 25th July Lewes Wanderer Roger Hutchings ventured up to Cambridgeshire to take part in a 10-mile event run by Chronos RT.  It was well worth the journey as he set a new personal best of 22 minutes and 57 seconds in finishing 33rd of the 48 to record a time.

On Tuesday 26th August Roger switched from the flatlands to hill-climbing as he participated in the East Grinstead Cycling Club event up Legsheath Lane from Weirwood Reservoir up towards Wych Cross.  He proved similarly adept uphill as his time of 6 minutes and 46 seconds gave him 10th position from the 22 entrants.