There was a healthy turnout of 32 riders including 6 guests for the tenth of Lewes Wanderers’ series of a dozen 10 mile time-trials on Monday 9th July.  Series leader Rob Rollings wasn’t riding and in his absence second placed Brett Davis claimed his first win of the series in a time of 21 minutes and 49 seconds, just 5 seconds ahead of Rob Pelham with Mark Frost a further 10 seconds behind in third. 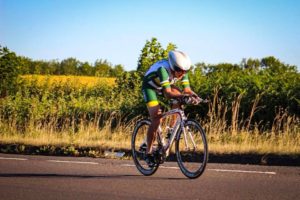 11th placed Lisa Davis was fastest of the four female entrants in a time just a single second inside 24 minutes and there were three personal bests set.  19th placed Roger Hutchings (25:47) improved by 27 seconds while 22nd Dave Beale (25:58) beat his previous best by 6 seconds set way back in 2011. One place behind him John Bryant fell just a lone second shy of joining him in breaking the 26 minute barrier, but did take 25 seconds off his PB.

With two rounds left to race an impressive 24 Wanderers have completed the half-dozen rides necessary to qualify for the overall standings with a further five riders still in with an opportunity to join them.  Rob Rollings looks likely to seal the championship as his average time of 21 minutes and 29 seconds is a full 20 seconds ahead of Brett Davis, but there are but 5 seconds between third placed Rob Pelham (22:12) and Mark Frost (22:17).  15th placed Kate Mankelow (25:40) leads the ladies ahead of 20th Sue Collett (26:28), but they could both be usurped by Lisa Davis (24:14) if she manages to complete one of the remaining two rounds.

Awards Dinner 2017 Round Up