While most people were perhaps out enjoying the last of the summer sunshine on the afternoon of Saturday 5th September a quintet of Lewes Wanderers were riding their bikes as fast as they could up and down the A3 near Liphook in Hampshire.  It was worth the effort as all produced blisteringly fast times in this Utag RT run 10-mile time-trial.

A notoriously fast course attracted a high quality field as reflected in the results.  Nick Dwyer’s time of 19 minutes and 51 seconds at an average of over 30mph was only good enough for 24th place.  Half-a-dozen places behind him Brett Davis, racing for trainSharp, sliced 12 seconds off his personal best and finally beat that magical 20 minute barrier by a scant 4 seconds while Peter Baker’s still highly impressive time of 22:21 placed him 113th out of 133 finishers.

The records weren’t confined to the gentlemen as in 10th and 11th positions out of the 24 female entrants were Lisa Davis (trainSharp) who reduced her PB by 9 seconds to 22:32 and Anna Dwyer (22:41) who improved by a huge 35 seconds.

The action switched to the more confined and orderly environs of the historic Goodwood Motor Circuit the following morning as A3crg hosted another of their highly popular 5-lap time-trials.

Half-a-dozen Wanderers headed west to test themselves over 11.8 miles of closed circuit competition. In the category for those on time-trial “rigs” once again Nick Dwyer proved himself the better of his clubmates.  His time of 24 minutes and 53 seconds gave him 8th place from the 64 finishers. 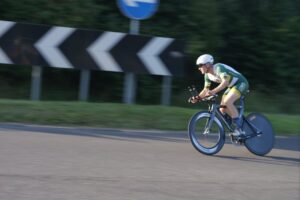 Paul Fletcher (26:40 and 24th) just got the better of Richard Burchett (26:58, 25th) while Dan Street experienced knee pain, but still finished 52nd in 28:59.  Anna Dwyer couldn’t quite repeat her performance from the day before, but her time of 28:41 still placed her 8th out of 14 females, while In the road bike category Rob Pelham recorded an impressive time of 28:46 to claim 12th place of the 31 entrants.

In the Southern Counties Cycle Union 25-mile event south of Dorking that morning Peter Baker placed 24th out of 43 finishers in a time of 1 hour 5 minutes and 26 seconds.

Leaving the road just east of Winchester was Dom Lowden who competed in the Battle-in-the-Bowl “Open Warfare” cyclo-cross race around Matterley Bowl that afternoon.  In the over-50 category he plugged in eight highly consistent laps all of between 10 and 11 minutes to finish in a highly creditable 4th place a lap down on the victor.