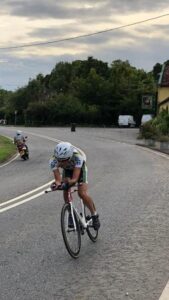 On Sunday 16th August a trio of Lewes Wanderers headed west to test their time-trialling mettle in a 25-mile event run by Bec Cycling Club.  Fastest of the three was Rob Rollings who sped around the course near Steyning in 53 minutes and 40 seconds to finish 9th of the 81 finishers.  Not far behind time-wise was Nick Dwyer in 13th in a time of 54:18, while Peter Baker stopped the watch 2 minutes and 24 seconds outside of the hour to place 58th.

The same three were back in action again 7 days later in a Southdown Velo run-event over the same distance, but further west on the A27 between Arundel and the Chichester outskirts.  On this occasion Nick got the better of Rob as he placed 17th in 53:27 to Rob’s 54:11 which left him 21st.  Peter got within 45 seconds of the hour mark as he placed 53rd of the 101 racers.

Representing trainSharp, but a Lewes Wanderers member Lisa Davis travelled even further afield both on the bike and off.  While the boys were firmly in East Sussex she was up in WIltshire competing in the National 100-mile championship on roads around Wootton Bassett.  She did rather well though as her time to cover the course of 4 hours 28 minutes and 25 seconds was good enough for 11th female overall and 2nd among the over 40s.

That was a sprint in comparison to her endeavours a week later when she competed in the National 12-hour Championship on roads on the England-Wales border to the south and east of Wrexham.  Despite her tri-bars breaking at around midday from 7am to 7pm she covered a remarkable 235.83 miles.  This was good enough for victory among the over-40 women and a highly impressive 4th place overall.  If that effort and the broken bars weren’t painful enough she was less than a mile off the distance needed to get a podium place.