The twelfth round of Lewes Wanderers’ series of 10-mile time-trials took place on the evening of Monday 22nd July and incorporated the newly-established “road bike 10” event.  A dozen of the nineteen competitors to sign-on opted to race without the benefit of time-trial bikes, “tri-bars”, deep-section wheels or time-trial helmets.

Behind a guest rider not subjecting themselves to such deprivation the winner, as he was in Round 11, was Martin Baddeley in an excellent time of 23 minutes and 40 seconds; beating Ed Tuckley (24:12) into 3rd overall; although Ed competed with the aerodynamic aids so didn’t qualify for the road bike category. 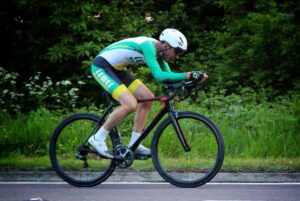 Richard Burchett (26:27) could only muster 11th place overall on his road bike, but he had already done enough to secure the series victory with an average time of 23 minutes and 8 seconds from his fastest six rides.  Very close behind was Paul Fletcher with an average of 23:15. Dan Street (23:52) being the only other one of the 15 riders with the necessary half-dozen qualifying rides with an average below 24 minutes (23:52), ahead of Joe Benians (24:03) and Ed Tuckley (24:22).

The following evening Paul Hanratty was the sole Wanderer to take part in a Brighton Excelsior CC 10-mile event in which he finished 22nd out of 23 racers in a time of 26:19.

Father and daughter Nick and Anna Dwyer both competed in the a3crg 15-mile time-trial on Wednesday 24th July.  Nick’s time of 29 minutes and 23 seconds gave him 11th place out of the 64 male competitors while Anna was 6th of the 9 female entrants with her time of 35:24.

On the sweltering evening of Thursday 25th July Dan Street was one of 32 racers to compete in Round 13 of the Cyclopark Summer Series on a closed circuit near Gravesend.  He passed the chequered flag in 16th place out of 24 finishers.