Lewes Wanderers’ final time-trial of the season - the Circuit of Chailey - due to be raced on Sunday 23rd September was sadly cancelled, not because of the atrocious weather, but due to a hitherto unforeseen clash with a cycle road race intending to use part of the same course simultaneously.

The non-running of the event meant that all of the club’s season long road championships were prematurely resolved.  The Classic League based upon 10 hilly or 25-mile plus time trials was secured by Brett Davis back in August, ahead of Nick Dwyer, Rob Rollings and Lisa Davis.

Similarly even before the weekend Dave Beale had amassed an unassailable lead in the Middlemarkers Competition ahead of Sue Collett and John Mankelow.  This is also based on a range of 10 events although of between 10 and 25 miles and the competition is only open to those who haven’t ridden a 25-mile TT in less than 1 hour and 5 minutes or recorded a sub 25 minute 10 in the past three years. 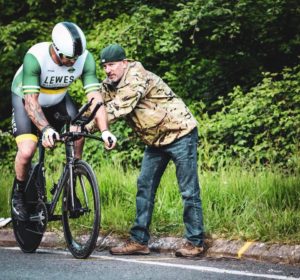 Sue would have faced a head-to-head duel with Lisa for the Chairman’s Circuit League for Ladies had the Chailey event gone ahead, but instead was granted victory by virtue of accruing more points from the Circuits of Laughton, Danehill and Earwig.

The Points Competition is based upon points awarded for finishing positions in nine of the club’s Evening 10 series, the four ‘Circuits’ and the Hill Climb and before Chailey Neil Gearing and Peter Baker stood an outside chance of overall victory.  However the cancellation meant Gavin Richards could rest easy safe in the knowledge he had clinched victory.

Dan Street was the lone Lewes Wanderer to cross the border into Kent for Round 3 of the Kinesis UK London and South East Cyclo Cross League in the wet and windswept grounds of Leeds Castle on Sunday 23rd September and promoted by Dulwich Paragon.

By his own admission he made a tentative start and his opening lap of 8 minutes and 14 seconds placed him 27th of the 64 starters at the end of the first circuit.  However, four consecutive laps of just outside 7 minutes saw him gain places each time around and a final one in just 6 minutes and 50 seconds granted Dan 19th position at the chequered flag.

Eastbourne Rovers CC hosted a 10 mile time trial along the A22 on the cool,…