Gina McGeever was Lewes Wanderers’ lone entrant in the Southern Counties Cycling Union Sporting 10 on Saturday 25th March.  On a cool and blustery morning in the foothills of the Surrey Downs Gina was some way off her best, but completed the 10 mile course in 31 minutes and 1 second to place her 5th among the female contingent entered.

Sunday 2nd April also dawned quite cool and blowy, but at least the sun was out for the SCCU 25 along the dual-carriageways to the north of Horsham.  Husband and wife Brett and Lisa Davis continued to show that their winter training regimes are paying big spring dividends with massive personal bests.  Brett took over three minutes off his previous best time set in 2015 and broke the magical hour mark for the first occasion with a superb time of 57 minutes and 45 seconds.  His wife Lisa did even better to slice over five minutes off her best set at the same event in posting a new mark of 1:04:08 which also gave her third place among the ladies.  John Mankelow was the third Lewes rider to compete and he recorded a solid 1:06:16. 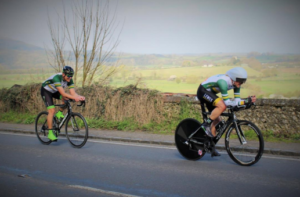 Closer to home seven Wanderers lined up for the East Sussex Cycling Association 2up Team time-trial on familiar roads between Lewes, Laughton and Halland.   Seven as Gina McGeever teamed up with her partner Jay Chisnall, representing the Veteran Time Trials Association (Surrey and Sussex).  Their time of 54 minutes and 16 seconds for the 20.5 mile course, cut short from 23.92 miles this year due to road-works in Ringmer, placed them 14th of the 20 pairs and first ‘composite’, ie not comprised of two riders from the same club.  Fairing considerably better were Tom Glandfield and Rob Pelham who combined to finish third in a time of 46 minutes and 54 seconds.  On their debut as a pairing Sean Quinney and Martin Baddeley worked to good effect to claim 7th place in 49:46.  One place and thirteen seconds back were the club’s third duo, that of Aidan McConville and Dan Street.