Back on the morning of Sunday 28th July Dan Street and Joe Benians took part in a criterium race forming part of the Eastbourne Cycling Festival.  On the tight street circuit both were unfortunate to be in the second half of the bunch when the field eventually split. They crossed the line together in 22nd and 23rd places respectively from the 42 finishers. 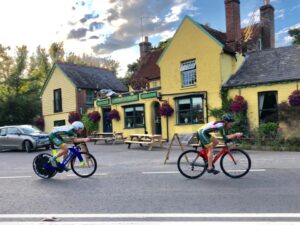 The following evening saw the thirteenth and final 10-mile time-trial of Lewes Wanderers’ summer series.  This round incorporated the 2-up where riders could compete in pairs, swapping places so as to share the effort whenever necessary.

Club member, but racing for ASL, Pete Morris teamed up with Howard Shaw (trainSharp) to triumph by over two minutes in a time of 20 minutes 22 seconds.  Runners-up and fastest pairing representing the host club were husband and wife team Brett and Lisa Davis in 22:28, just ahead of Dom Lowden and his daughter Joscelin in 22:36.  They in turn were only 5 seconds ahead of the fourth placed duo Martin Baddeley and Richard Burchett (22:41), with Joe Benians and Kate Parrish in 5th with a time of 23:11.

Riding solo out of choice David Wilkins reduced his personal best for the distance by 20 seconds to 27:05 and became the first club member to set an outright PB on the new course the club were forced to adopt due to roadworks on the A22.

There was another personal best on the evening of Wednesday 31st July as Anna Dwyer took a fantastic 1:16 off her previous mark over 10 miles to improve to 23 minutes and 16 seconds.  She placed 10th out of 17 female competitors in the a3crg Final Greatham event while her father Nick was 13th out of 61 men thanks to his superb time of 19:42.

Club Chairman Dom Lowden failed by just 3 seconds to make it a hat-trick of personal bests from club members within a week, but his excellent time of 21:58 gave him 12th position out of 30 entrants for a Worthing Excelsior CC 10-mile event on Thursday 1st August.  Paul Hanratty came 26th in 25:42.