The fifth of Lewes Wanderers’ series of 10-mile time trials occurred on Monday 3rd June and twenty-one cyclists, including two guests, turned up to see what they could achieve.

Quickest Lewes rider on the night and in second overall was Paul Fletcher in a time of 23 minutes and 22 seconds, the fifth different Wanderer to top the club standings this series.  It was only by a matter of seconds though as fast improving Joe Benians took a further 12 seconds off his personal best to finish third in 23:30 and 4th placed Dan Street was only a further 8 seconds back.

The first of Lewes Wanderers’ three Criterium races around the Laughton circuit was held on the evening of Thursday 6th June and it was an eventful race if not for the best of reasons.

The pace was frantic from the start with several riders spat out of the back of the 51-strong peloton on the opening lap, never to regain contact.  On the second of what should have been five 6.72 mile laps the British Cycling commissaires neutralised the race to remind the competitors that they weren’t on closed roads and so should only use the full width of the carriageway when safe to do so.

This meant that the first of what should have been a trio of intermediate “Prime” sprints up Shortgate Lane was nullified, but the remaining two did take place.  On lap three Carl Farrell (Sussex Revolution VC) triumphed from Steve Kane (ASL) and James Bullen (URDT), while the next time around Kane beat Bullen to the line with Farrell’s team-mate Paul Tomlinson (SRVC) in third. 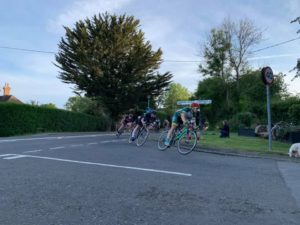 They should all have vied for the bunch sprint at the end of lap five, but for some reason the lap counters at the finish line lost count and sent them all round for a sixth tour at the end of which there was little confusion over the winner as Chris Filewood (ASL) met the chequered flag a clear half-second ahead of Ben Tappenden (trainSharp) with Tomlinson having recovered to take third just ahead of Bullen.

The host club’s riders all showed themselves near the front during the race, but Dan Street and Nick Dwyer crossed the line alongside one another towards the rear of what was left of the bunch, while debutant Joe Benians cramped up with a couple of laps to go and was one of nine riders not to finish.

Up near Newmarket Nick Dwyer had bigger fish to fry as he was competing in the VTTA National 25-mile time-trial Championships.  His superb time of 50:58 gave him a well-deserved 11th place from 120 to complete the course.