With Round 1 having been cancelled due to dangerous gusting winds Lewes Wanderers’ series of 10-mile time-trials for 2021 kicked-off with Round 2 on the evening of Monday 10th May.  The weather may have been less extreme, but it was still far from conducive to fast times.

Sixteen riders from the host club, including two female and a pair of first-timers, took to the start line to test their mettle against the stopwatch on the A22 based-course from East Hoathly to the Boship roundabout and back. 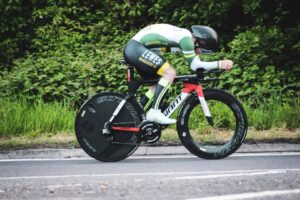 Fastest by a clear margin was Rob Rollings who flew past the timekeeper 21 minutes and 35 seconds after having been counted down and sent on his way.  Runner-up on the virtual podium was far more closely contested as Dan Street (22:53) beat Duncan Fuller by a scant 4 seconds.

There were no new personal bests, but 9th placed Graham Knowles (25:39) came within a second of matching his.  Vince Busk was 10th in 26:16, 12 seconds ahead of second quickest female Kate Thomas, who in-turn was 10 seconds faster than Neil Edwards.

Action turned from solo-efforts on the open highway to that of the closed-circuit variety for much of the rest of the week.  On 12th May Peter Baker returned to the Preston Park outdoor velodrome in Brighton where he finished 6th out of 8 in the Seniors Tempo Race forming part of the Sussex Cycle Racing League run Wednesday Track League.

He and Adrian Hills (ERCC) were back on the same A22 course the following night for Round 4 of Eastbourne Rovers’ series of 10-mile events.  Peter’s time of 24:42 placed him 8th of 19 finishers, while Adrian brought up the rear in 36:42.

The opening round of the South East Road Racing League (SERRL) Cyclopark races took place amid showers on the outskirts of Gravesend on the afternoon of Saturday 15th.  In the opening race for Category 4 racers (based upon qualifying points) Richard Burchett got carried away, went out too hard and had to settle for 22nd of the 28 finishers, one position behind his clubmate Paul Fletcher (trainSharp).  While in the following event for Cat 3 racers Dan Street came a fine 14th out of 25 entrants.

Not to be deterred, Richard tried again the following morning in Round 3 of the SERRL races at Ardingly Showground.  In atrociously wet conditions he fared far better in placing 13th out of 18 with Simon Head five places behind.

At the same time over near Plaistow, West Sussex, Duncan Fuller completed Addiscombe CC’s “Sporting” 25-mile time trial in 1 hour 9 minutes and 4 seconds.  If he hadn’t had to stop to reattach his tri-bars he may have finished far higher than 19th place and avoided one of the many torrential downpours that scudded through the morning.  That said he did well to finish as 9 of the 34 starters were DNFs for one reason or another.

No such problems for Sally Turner, racing for trainSharp in a Newbury Velo event in bright sunshine over near Tring as she reduced her personal best over 10 miles by 9 seconds to 21 minutes and 35 seconds.