Thirteen Lewes Wanderers took part in the East Sussex Cycling Association 10-mile time-trial in the early hours of Saturday 12th September.  Racing for URDT Anya Tamplin continued her sparkling form as she claimed victory among the female contingent with her time of 23 minutes and 26 seconds for 41st overall.

Exactly one minute behind according to the stopwatch was Anna Dwyer in 55th overall and second fastest female.  5th quickest in 79th was Kate Parrish in 26:09, while Anna’s mother Kaye was 6th/89th in 31:21. 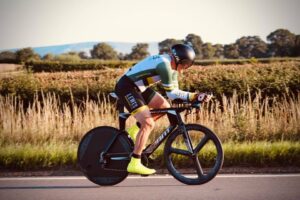 In what was some form of family day out Kaye’s husband Nick was head-and-shoulders ahead of the other male Wanderers in 9th place in a time of 21:20.  Next best and beating 23 minutes for the first time was Joe Benians in 24th with a new personal best of 22:47.

That same afternoon Peter Baker was back on the start line for the Veteran Time Trials Association London & Home Counties National 10-mile Championship.  In the event held on the  B4000 northwest of Newbury he improved by 40 seconds on his time from the morning to place 77th out of the 126 to finish in 23 minutes and 58 seconds.

Peter Baker and Sally Turner were among a dozen riders who started, but were unable to finish the Sussex Cyclists Association 15-mile event on the morning of Saturday 19th September.  A car crash near the roundabout junction where the A283 course met the A24 dual-carriageway meant that they were all forced to abort their high-speed efforts before the finish line, although strangely according to the regulations the result was allowed to stand.

In Sunday 20th September Blazing Saddles Hill Climb up Knight’s Hill overlooking Chichester Kate Parrish finished in a fine 2nd place out of the dozen female entrants and 38th out of 59 overall thanks to her time of 3 minutes 54.6 seconds.

In our report of the 7th September it was wrongly stated that Anna Dwyer had not previously competed in the National 10-mile Championship.  This was an error.  She had of course raced for the first time in 2019 when she finished 37th of the 62 female competitors and matched her personal best time of 23 minutes and 16 seconds.