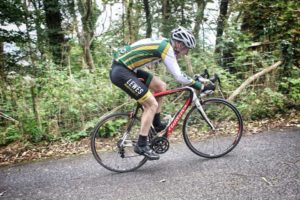 On Sunday 30th September Lewes Wanderers’ Peter Kilby competed in the John Bornhoft Hill Climb promoted by Kingston Wheelers and raced up Leith Hill, near Dorking, Surrey.  His time of 5 minutes and 12 seconds was good enough for 36th out of 46 entrants.

Peter was in action again the following Saturday morning when he and Edward Tuckley competed in the Brighton Mitre hill-climb up Steyning Bostal.  Edward’s time of 5 minutes 31.1 seconds just edged out his club-mate Peter (5:35.6) for 18th place of the 21 entrants.

Peter was back for more that afternoon in Brighton Mitre’s event up Mill Hill out of Shoreham and over the A27 when his time of 12 minutes, 29.9 seconds gave him 16th position from 17 finishers and once more the following day when his time of 5 minutes 45.9 seconds placed him 19th of 28 to take part in a Newbury RC hill climb.

The last of Lewes Wanderers' 2018 programme of time-trials was held that same sunny, but chilly morning.  The Gents 2-up GP is a slightly misleading name as it’s also open to women, the only criteria being that the rider being timed must be a 'veteran', that is over 40 years of age at the date of the event and they are only allowed to overtake their partner in the final 200 metres of the 17.2 mile course.

Best of the trio of pairs representing the host club were Nick Dwyer and Dom Lowden.  Last year Nick was paced to victory, this year he towed the club chairman to 3rd place in a time of 39 minutes and 32 seconds, four seconds faster than his winning time from twelve months ago.

Father and daughter John and Kate Mankelow (48:35) were 20th overall, but third fastest family team.  Brett Davis was due to team up with his wife Lisa, but instead rode solo in a fine time of 41:31, while Graham Knowles led Brian Clarke to 24th out of 25 teams in 57:40.

A quartet of plucky Wanderers signed up for the legendary Catford CC Hill Climb up the fearsomely steep York’s Hill west of Sevenoaks later that morning.  Dan Street beat his time of last year by six seconds and improved by six places as he fared best of the four in claiming 60th place in 2 minutes 37.2 seconds.

All rider limits are absolute and will not be exceeded under any circumstances. They are…

The onset of autumn traditionally sees not just a change in the weather, but a…