The weekend of the 29th and 30th July kicked off with a pair of Lewes Wanderers competing in one of the shortest events regularly run and continued with rides of ever increasing duration.  Early Saturday morning Peter Baker and Johan Stegers were among those racing up and down the A264 near Crawley in the Epsom CC 10.  Official results are yet to be published.  The following morning the distance trebled for the Sussex Cyclists' Association 30 mile championship.  Gina McGeever was one of only two women to contest the ladies title and her time of 1 second shy of 1 hour and 19 minutes gave her top step on the podium by two-and-a-half minutes and 23rd overall.

There were five Lewes riders among the 25,000 or so setting off from Queen Elizabeth Olympic Park in east London to tackle the Prudential Ride London 100 mile sportive early that same day.  All of them got safely round with Guy Brown and Jon Stuart taking just over 5 hours to complete the course, Martin Bussey just over six hours, Pip Jones some six-and-a-quarter and Sally Buckland just beating 7 hours. 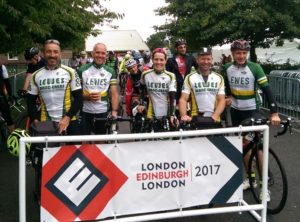 Slightly further north in Loughton, Essex near Junction 27 of the M25 where it meets the M11 a similar number of intrepid Wanderers were setting out to undertake a cycling challenge almost nine times as long, that of London-Edinburgh-London.  Starting shortly after 6am Lisa Davis, Paul Gibbons, Charlie Middleton, John Miller and Micky Turner had committed themselves to pedal 892 miles in under 5 days.  Shortly after 11pm that evening the men rolled into the control at Thirsk, just north of York with 253 miles in their legs.  Micky was obviously still feeling good and so pushed on to the next checkpoint 42 miles on at Barnard Castle near Darlington before stopping to rest at around 2:30am while Lisa caught up with the others  an hour or so earlier.  That extra leg clearly paid dividends as Micky was first of the five to reach the halfway point at Edinburgh at 5pm on Monday, although they are all still ahead of schedule.