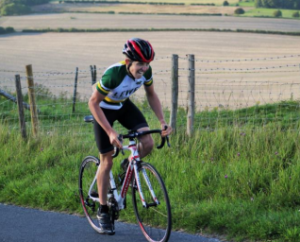 For various reasons and certainly not the weather as the evening of Monday 31th July was a balmy summer one, there were only thirteen entrants for the annual Lewes Wanderers hill climb up the fearsome Firle Bostal and none of them were female. Clear winner was 17 year old Cameron Cragg who scaled the 1433 yards in 4 minutes and 25 seconds, 17 seconds faster than he managed in 2016 and 22.65 seconds ahead of runner-up Dan Street, who also improved on his time of last year. Even evergreen Peter Baker found room for improvement, although while he claimed third place he well 3.05 seconds short of beating 5 minutes. Close behind 4th placed Brett Davis set a new personal best of 5:06.05, as did Geoff Letts 6:35.31 (10th).

A couple of hours earlier Micky Turner had checked into the Edinburgh checkpoint and thus reached the halfway point of the endurance cycling odyssey that is to ride the 892 miles from London to Edinburgh and back within 100 hours. By 9pm he had been joined by clubmates Paul Gibbons, Charlie Middleton and John Miller with Lisa Davis rolling in shortly after midnight. Thanks to generally fine weather and a prevailing tailwind all five were comfortably ahead of schedule, but they were to be less fortunate on the journey south.

Not only was the wind now against them, but they also endured some torrential rain on top of the physical demands of such an endeavour. Some of the effects can probably easily be at least anticipated by anyone with a passing knowledge of cycling - sore legs, stiffness in neck, shoulders and arms, sleep deprivation and chafing being just four. One that might not be appreciated is the difficulty the body faces in taking in and processing enough fuel to keep powering the engine. Unfortunately Paul Gibbons was to be let down by his metabolism with 550 miles under his belt as on the way back to the Barnard Castle control on Tuesday lunchtime as he succumbed to a severely upset stomach and was forced to abandon; a passing stranger taking pity on him and driving him to her nearby home to recover and await collection by one of the team’s support crew. He was far from alone in
having to admit defeat to the rigours of such a massive undertaking as 350 of 1442 starters were forced to stop for one reason or
another.

By Tuesday night Micky had got as far south as Louth, between Cleethorpes and Skegness, with 730 miles in his legs before attempting to get some sleep, John and Lisa stopped 100 miles earlier in Thirsk, while Charlie pushed on south of 40 miles south of York before taking a break in Pocklington at a little after 1am. Despite the inevitable fatigue seeing their averages speeds dwindling the quartet were now in the virtual home straight, Micky Turner being the first to complete at 4:37 on Wednesday afternoon, having covered the 892 miles in 82 hours and 22 minutes with still some 17 hours and 37 minutes to spare. At 2 minutes past one in the morning John Miller arrived having taken 90 hours and 47 minutes. Lisa Davis was third to finish at 6:45
on Thursday morning with Charlie less than two hours later and still with over 90 minutes in hand before the cut off time.

Eastbourne Rovers Cycling Club hosted a pair if time trials over the weekend of 5th-6th August and eight Lewes Wanderers were involved. Saturday morning saw the Stan Nash Memorial 10 in which Gina McGeever proved fastest of the three female entrants thanks to her time of 25 minutes and 29 seconds. Father and son Paul (28:14) and Michael Valks (24:45) finished 18th and 29th of the 33 finishers respectively. Paul was back in action the following morning when his time of 1 hour, 12 minutes and 42 seconds placed him 58th of the 63 finishers in the Cliff Sharp Memorial 25. At least he finished as John Mankelow fell foul of a puncture, while faring much better was Brett Davis whose 56:07 took a minute-and-a-half off his personal best and granted him 10th overall and fastest in the 40-49 year old category. Also to ride were Peter Baker (31st, 1:00:48), Sam Ramsey (37th, 1:02:17) and Johan
Stegers (47th, 1:05:01).