The road works on the A22 that had blighted the previous two rounds of Lewes Wanderers evening 10 mile time-trial series were mercifully not evident for the final round on Monday 17th July.  Indeed the 36 racers that took to the start line were even blessed with dry, sunny weather, with the potential for fast times.  One man who took full advantage was former-Wanderer Pete Morris (ASL 360) who scorched round in 20 minutes and 18 seconds, the fastest time of the whole series, but that was just a sideshow to the real action. 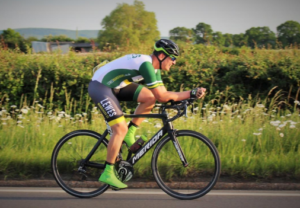 At stake were the overall championship, based upon a rider’s fastest 6 rides, and the Athlete’s 10.  That too requires a competitor to have competed in 6 of the previous 11 events with the winner being the one to get nearest on the night to their best, but without the aid of a time-trial bike, aero helmet or even tri-bars.  17th on the night Martin Baddeley (24:18) came within 43 seconds off his best using TT equipment (23:35) so narrowly took the title from 3rd placed Neil Gearing (25:49 vs 24:59) and 20th Lisa Davis (25:19 vs 24:24).  Lisa had the consolation of scooping the ladies overall with her average time from her fastest half-dozen rides being a second below 25 minutes; runner-up was Kate Mankelow (26:23).  In the absence of Callum Middleton, Lisa’s husband Brett posed the biggest threat to 2014 and 2015 overall winner Tom Glandfield, but he went out too strong and faded on the return leg from the Boship Roundabout to finish 3rd on the night to finish a second outside 22 minutes and far behind Tom’s 21:22.  Thus Tom Glandfield improved on his runner-up of last year to triumph for a third time with an average time of 21:40 to Brett’s 21:57, with Aidan McConville (22:59) holding off Gavin Richards (23:11) for third.  Fastest athlete on the night was 5th placed Stephen Comben in an astonishing 22:44.

Showing his versatility back on Saturday 8th July Tom Glandfield took part in the Welsh CA 12 hour time-trial and covered 277.67 miles of South Wales roads in the time allowed to finish a fine 4th of 22 finishers, less than 9 miles behind the winner.  A week later a trio of Wanderers travelled considerably less distance in both senses when taking part in the Brighton Excelsior 10.  Michael Valks performed best, his time of 23 minutes and 42 seconds placing him 14th of the 37 entrants.  His father Paul was 32nd in 26:59, while Peter Barling came 19th thanks to his 24:13.

The following morning in the same club’s 25 mile event Gina McGeever posted a strong 1:03:56 to place 4 of the 6 female riders and 25th of 40 overall.  On the evening of Wednesday 20th Alan Lester also headed in the direction of Brighton, to Preston Park track to be more precise, for Round 14 of the Sussex Cycle Racing League’s summer multi-discipline events.  The Lewes rider placed 4th in the Block Handicap Pursuit, 6th in the 3 lap dash and 7th in the scratch race for his age group.  The following evening Gavin Richards and Mark Fisher went the opposite way along the coast to compete in an Eastbourne Rovers CC run 10.  Gavin’s 23:35 granted him 6th of the 16 on the time-sheet, Mark’s 25:59 left him 11th.

The Southern Counties Cycle Union 100 mile event scheduled for early on Sunday 23rd July was cancelled due to fog, but further west near Arundel the Southdown Velo 50 went ahead with Peter Baker posting a time of 2 hours, 2 minutes and 16 seconds granting him 16th of the 33 finishers.  It wasn’t the weather, but the return of yet more roadworks on the A22 that put paid to Lewes Wanderers proposed 2-up 10 on the evening of Monday 24th.