In what is likely to be her last competitive ride for the club, and certainly her last for 2016, Joscelin Lowden signed off in style by smashing her own club record for 10 miles on the morning of Saturday 17th December.  In considerably colder and mistier conditions than when she set the previous mark of 23 minutes and 13 seconds in late July Jos stormed up and down the A31 near Farnham to complete the course in a superb 22 minutes and 35 seconds.  She wasn’t alone on the road, however as, on top of the motorists going about their business, there were 82 starters for the Farnborough and Camberley Cycling Club run event with Jos finishing second among the 12 women amongst them.  Next year Jos moves on to ride for the Aprire Bicycles / HSS Hire Women’s Cycle racing Team and the club wishes her all the best in her endeavours for her new outfit.

2017 was but a few hours old when the Lewes Wanderers were back out on the road testing themselves.  In this case it was club secretary John Mankelow in the Southborough and District Wheelers 10 New Year’s day 10 mile time trial along the A28 east of Bethersden, Kent.  On a wet and blowy day it was little surprise that over a quarter of those who had entered online before Christmas thought better of actually turning up to race.  Not one to be deterred, John persevered and his time of 27 minutes and 32 seconds placed him 33rd of the 63 finishers on the day. 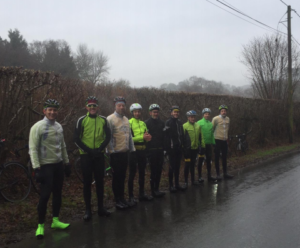 Sunday 15th January was the date for Round 2 of the club’s Reg Porter Trophy – a three event competition run in the winter months designed to attract people out onto their bikes when it can be all too easily to find reasons to stay in the warm and dry.  This particular leg involves riders free-wheeling down Stone Hill near Horam and, strictly without pedalling, to get as far up the other side as possible before sticking their allocated marker into the grass verge in line with where their front axle happened to finish when they came to rest.  On the day the test was as much about determination and motivation as technique or mass as the thermometer was barely registering positive numbers and steady penetrating rain meant only 10 brave souls assembled at the summit.  At his first attempt Martin Baddeley emerged victorious just half a wheel ahead of the winner of the Round 1 Tourist Trail – Rob Pelham.  Simon Yates was third in front of your correspondent in 4th, Club Runs leader Ian McGuckin (5th) and Dan Street (6th).  Stephen Burgess followed up his fourth place in Round 1 with a 7th place here while Chris Martin, who placed 3rd in the Toursit Trail was 10th here behind Guy Brown and Bob Evans.  With only Round 3 - the Speed-Judging on 12th February – to come Rob Pelham may already have one hand on the trophy he previously held in 2010 as only Stephen, Chris, Martin and Dan have completed both events and can therefore possibly claim enough points to overtake him.