Sunday 10th November saw Round One of Lewes Wanderers’ annual Reg Porter Trophy – The Tourist Trail.  This three event competition is run by the club over the winter months in an effort to encourage people out onto their bikes during the winter months.  Eleven riders turned up outside Boots in Uckfield for 9am on what was a cold, but bright and sunny morning even if the roads were awash with the effects of heavy overnight rain.

Club Runs leader Ian McGuckin had taken it upon himself to devise a relatively simple 23 mile route up through Piltdown to Fletching and then south via Newick, Barcombe and Offham to the club’s home town.  Skirting Ringmer to pass Glyndebourne Opera House and finally through the charming village of Glynde before taking refreshments at Middle Farm, Firle the competitors would be required to answer 19 questions of varying difficulty based upon things they could supposedly see along the way. 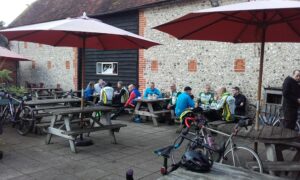 Fastest around the course was Paget Cohen, who arrived with a quarter-of-an-hour to spare, but having missed some of the clues so he only scored 24 out of the possible 33 points on offer.  The only other rider to finish within the 11 o’clock time-limit was last year’s winner of this event and the overall Trophy Rob Pelham who again proved his mastery of this particular challenge with 25 points accrued making him the leader “in the clubhouse”.

Finishing positions were then converted into points for the overall with Rob collecting 30, Paget 29, Darren 28 and so on down to Peter with 20.  Rob will thus go into Round 2, the freewheeling on 19th January well placed to retain the title he won last year.