Richard Burchett was the only Lewes Wanderer to compete in an Eastbourne Rovers CC 10 mile time-trial on the evening of Thursday 2nd May, but he recorded a fine time of 23 minutes and 20 seconds to come away with 7th out of 23 starters.  The event was won outright by former Wanderer Joscelin Lowden (The Independent Pedaler) in a superb 21:50; the only rider to beat 22 minutes. 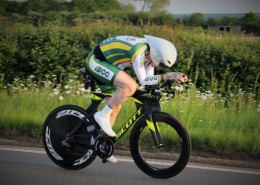 Father and daughter Nick and Anna Dwyer travelled down to Steyning on the morning of Saturday 4th May to take part in a Sussex Cyclists Association 10 mile time-trial.  Nick’s fantastic time of 21:06 was only good enough for 5th place out of the 60 finishers such was the quality of the opposition. Anna effectively bested her dad in relative terms as she was 4th fastest female in a new personal best of 25 minutes dead.

Nick was back in action again the following morning for the SCA 25 mile event.  In chilly conditions his time of 54 minutes and 52 seconds placed him in 6th overall.  Club-mate John Mankelow was 50th of the 57 finishers in a time of 1:11:24.

Circuit of Chailey and National 25